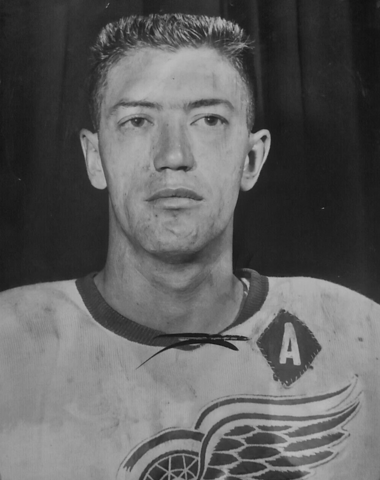 Arbour then made his NHL debut for the Red Wings on October 8, 1953 vs New York Rangers at The Olympia in a 4-1 Detroit win. He played a total of 36 regular season games for Detroit before being sent to the Sherbrooke Saints of the Quebec Hockey League / QHL to finish the season. Arbour got his name on the 1954 Stanley Cup without ever playing in the playoffs for Detroit.

Arbour played his first full season in the NHL during the 1957-58 season for Detroit. He scored his 1st NHL goal vs Al Millar of the Boston Bruins on January 9, 1958 at :37 seconds of the 2nd period at The Olympia in a 4-1 Detroit win.

While playing with Detroit, Arbour helped win the Prince of Wales Trophy in 1954 and 1957 as NHL regular seasons champions.

Arbour was then claimed / signed in the off season by the Chicago Black Hawks, where he started the 1958-59 season, playing the next 3 years in Chicago, helping the Black Hawks win the 1961 Stanley Cup championship.

The Toronto Maple Leafs signed Arbour to start the 1961-62 season, and he would help the Maple Leafs win the 1962 Stanley Cup championship. Arbour only played 4 games for the Maple Leafs during the 1962-63 season, playing most of the season with the American Hockey League / AHL Rochester Americans. The 4 games with Toronto, qualify Arbour as a winner of the 1963 Prince of Wales Trophy, which the Maple Leafs won as NHL regular season champions.

Under Arbour's captaincy, St. Louis won the Clarence S. Campbell Bowl as NHL West Division regular season champions in 1969 and 1970, also reaching the Stanley Cup final again in 1969 and 1970, bowing out each time in four straight.

No question, his playing days were numbered and when coach Scotty Bowman chose to move into a managerial role Arbour became head coach in 1970. He also played 22 games for the Blues during the 1970-71 season.

The Islanders won the Prince of Wales Trophy in 1982, 1983, 1984 as Wales Conference playoffs champions.