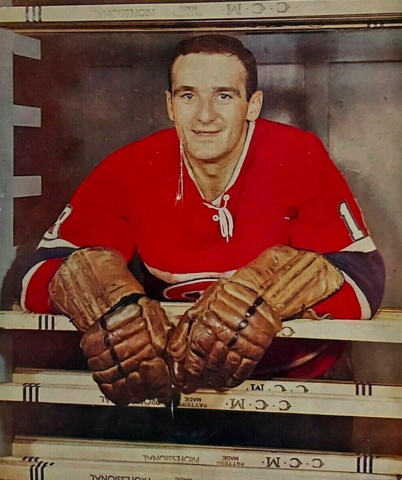 Bonin began the 1951-52 season in Quebec but his rights were soon sent to Detroit. He divided the remainder of the year between the AHL’s St. Louis Flyers and the Red Wings, making his NHL debut on December 27, 1952 vs Montreal Canadiens at The Forum. He picked up a assist in a 2-2 tie.

Bonin scored his 1st NHL goal vs Gerry McNeil of the Montreal Canadiens on February 28, 1953 at 8:50 of the 3rd period at The Forum in a 4-3 Red Wings win. His goal was the game winner.

Bonin played 37 games for the Red Wings and 5 playoff games during his first stint in the NHL.

Bonin returned to the minors, playing for the Sherbrooke Saints and the Edmonton Flyers, Bonin played only one game with Detroit in 1953-54. He fought his way back to the big leagues, sticking with the Red Wings to start the next season. His official rookie season would be one to remember, as it ended with a Stanley Cup victory over the Montreal Canadiens in the spring of 1955.

Bonin then played a season with the Boston Bruins in 1955-56, before making his return to Quebec the next season with the Quebec Aces, helping them win the 1957 Edinburgh Trophy championship.

The Montreal Canadiens picked him up in the 1957 inter-league draft. The four and a half years Bonin spent wearing “La Sainte Flanelle” were the best of his Hockey career.