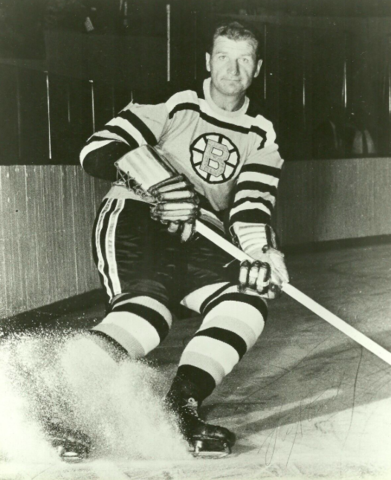 Stasiuk played his early Hockey in Lethbridge, on frozen ponds and rinks, and would play against anybody who would play him and his friends. He finally played his junior Hockey for the local Lethbridge Native Sons.

Stasiuk played his final year of junior Hockey with the Wetaskiwin Canadians in 1947-48, helping them reach the finals of the 1948 Alberta Junior Playoffs, losing to his old team, the Native Sons.

Stasiuk then turned pro with the United States Hockey League / USHL Kansas City Pla-Mors for the 1948-49 season. He started the next season with the Pla-Mors, and was then signed by the NHL Chicago Black Hawks, playing his 1st NHL game on February 19, 1950 vs Boston, and would score his 1st NHL goal on March 26 vs Detroit, his only goal during the remainder of the season.

Stasiuk started the 1950-51 season in Chicago, scoring 5 goals, 3 assists in the first 20 games of the season, when he was traded to the Detroit Red Wings with Bert Olmstead for Steve Black and Lee Fogolin, December 2, 1950. Stasiuk played the remainder of the season with the Red Wings, and the majority of the next season with Detroit, also playing 8 games with the American Hockey League / AHL Indianapolis Capitals. Stasiuk played 7 playoff games for the Red Wings, scoring 2 assists in helping Detroit win the 1952 Stanley Cup championship.

The Red Wings then sent Stasiuk to the newly established Western Hockey League / WHL for the 1952-53 season, where he played for their minor pro affiliate team, the Edmonton Flyers. He had a outstanding season, leading the team in scoring with 37 goals, 43 assists during the regular season, as the Flyers won the 1953 Lester Patrick Cup (President's Trophy) as WHL champions. He was also selected to the WHL First All-Star Team.

Stasiuk then split the 1953-54 season between Detroit and Edmonton, playing 42 games for the Red Wings during the regular season, and finished with the Flyers, helping them reach the semi-finals of the WHL playoffs. The Red Wings won the 1954 Stanley Cup championship, and Stasiuk's name was left off the Cup, as he played with the WHL Flyers during the playoffs.

Stasiuk played 11 games for the Flyers to start the 1954-55 season, scoring 7 goals, 6 assists in just 11 games and was brought back up to play for the Red Wings, finishing the season in Detroit, and helping the Red Wings win the 1955 Stanley Cup championship, with 5 goals, 3 assists in the playoffs.

In Boston, Stasiuk really found his pro game. He found chemistry with Johnny Bucyk and Bronco Horvath, a grouping dubbed "The Uke line" because of the Ukrainian ancestry of the three players. The trio consisted of Stasiuk on the right, Horvath in the middle and Bucyk over on the left side. For about the next five seasons, the "Ukes" terrorized the opposition. In the 1957-58 season, this line became the first in NHL history to have all three participants reach the 20 goal mark. Stasiuk scored a career high 68 points (29 goals) in 1959-60, and played in the NHL All-Star Game that season.

Stasiuk played the 1963-64 season for the Hornets, and finished his playing career with the Memphis Wings of the Central Professional Hockey League / CPHL in 1964-65.

After retiring, Stasiuk moved to coaching. He took over the Pittsburgh Hornets of the AHL for two seasons and later led the same league's Quebec Aces to back-to-back losses in the Calder Cup finals. Immediately after coaching the EHL Jersey Devils from 1966-68, Stasiuk was selected to coach the NHL Philadelphia Flyers. His team finished out of the playoffs by a single point in 1969-70, and then were eliminated in the first round of the postseason the next year. Stasiuk was fired after the 1970-71 season; the Flyers offered him a scouting position, but he took a head coaching job three games into the NHL season with the California Golden Seals. Stasiuk was fired after the season due to a stylistic conflict with management, and he then spent one year behind the bench of the Vancouver Canucks before settling into a career in junior Hockey coaching.