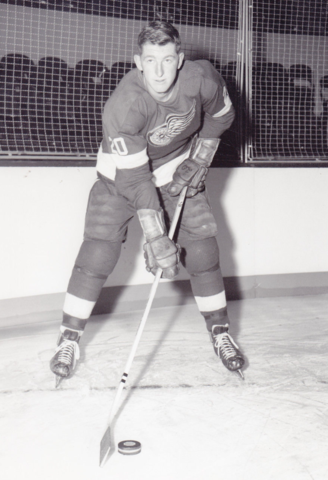 Lunde played his junior Hockey with the Edmonton Oil Kings of the Western Canada Junior Hockey League / WCJHL from 1953 to 1956, and led the team in scoring in 1955-56 but the Oil Kings couldn’t get past the Regina Pats in the playoffs. Lunde joined up with the Pats over their Memorial Cup run. Regina fell to the Toronto Marlboros in the finals.

A prospect of the Detroit Red Wings, Lunde turned pro, and moved up to play for the Edmonton Flyers of the Western Hockey League in 1956. Lunde scored 39 goals and 43 assists during the 1957–58 season, which caught the attention of the Red Wings.

The following season, he debuted in the National Hockey League, playing in 68 games for the Red Wings, scoring 14 goals and 12 assists as a rookie.

Lunde was a regular in the Red Wings' lineup though the 1960–61 season, when Detroit reached the Stanley Cup finals. Lunde was returned to the Flyers 23 games into the 1961-62 season. Playing just 41 regular season games, Len scored 26 and assisted on 37 for 63 points. He was third in team scoring despite playing a little more than half the season. The Flyers won the WHL championship in seven games over the Spokane Chiefs. Edmonton was coached by Bud Poile. (Poile would pave the way for Lunde’s brief return to the NHL in 1970-71).

Lunde was traded to the Chicago Black Hawks in June, 1962, and scored 6 goals. 22 assists playing on a checking line with Eric Nesterenko and Ron Murphy during the 1962-63 season.

Lunde was claimed by the NHL Minnesota North Stars from Chicago in the NHL Expansion Draft, June 6, 1967, and played 7 games for the North Stars before being traded to the Toronto Maple Leafs (Rochester Americans of the AHL) by Minnesota with Murray Hall, Ted Taylor, Don Johns, Duke Harris, and the loan of Carl Wetzel for J.P. Parise and Milan Marcetta, December 23, 1967, playing in 37 games for the Americans, where he found his scoring touch again, with 19 goals and 33 assists, and helping the Rochester Americans win the 1968 Calder Cup championship.

Lunde's playing rights transferred to the Western Hockey League / WHL Vancouver Canucks after the WHL club purchased Rochester (AHL) franchise, August 13, 1968. Lunde played 2 seasons with the WHL Canucks, and both seasons, the Canucks were crowned WHL champions. Lunde's NHL rights were transferred to Vancouver after the NHL club purchased Vancouver (WHL) franchise, December 13, 1969. Lunde was with the new NHL Canucks to start their debut season in October, 1970, playing in 20 games during the 1970-71 season.

Lunde then played in Finland with Ilves Tampere from 1971-72 and was head coach of the Finnish national team in World Championships 1973 in Moscow. Lunde had initially retired in 1972, but played one last full season in 1973–74 with the Edmonton Oilers of the World Hockey Association, where he scored 26 goals and added 22 assists for 48 points. Lunde re-retired in 1974.

Lunde later coached in Sweden and was a scout for the Edmonton Oilers in Sweden and Finland. Part of his responsibility was monitoring the progress of young talents Esa Tikkanen and Jari Kurri.