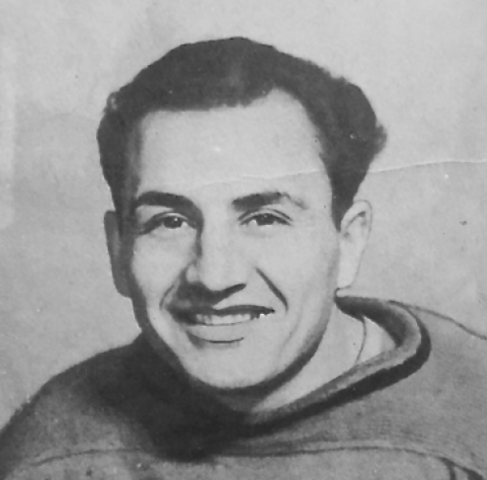 Folklore has Benoit learning to play Hockey on the Sturgeon River in St. Albert, making his own Hockey sticks from curved tree branches, and later had to hitchhike or occasionally walk from St. Albert all the way to the Edmonton Athletic Club for practices and games. Benoit was known as a good goal scorer in his youth. Only 1 season of play at the Edmonton Athletic Club in 1935-36 is recorded with Benoit scoring 8 goals (2 assists) in 8 games played.

Benoit also played for his St. Albert Hockey team, in the early to mid 1930s.

He would head to British Columbia in the summer of 1936, settling in Trail and signing with the Trail Smoke Eaters, a senior team that would go on to be considered one of the best in Canadian History. Benoit had a tough time cracking the Smoke Eaters line-up in the 1936-37 season, but he did score 13 goals (7 assists) in 13 games played that season, which opened the eyes to the coaching staff.

Benoit was a regular the next season, where he scored 26 goals (7 assists) in 20 regular season games, then turned it up in the playoffs for the Smoke Eaters, scoring 5 goals (3 assists) in the BC-Alberta championship playoffs, helping Trail defeat the Calgary Rangers and then the Flin Flon Bombers.

Trail then had to play the Port Arthur Bear-Cats in the Western Canada final, winning in 3 straight games in the Allan Cup playoffs, and then the Cornwall Flyers for the Canadian championship in a best of 5 series with the Smoke Eaters winning the 1938 Allan Cup championship 3-1 in games.
Benoit scored 12 goals (7 assists) during this magnificent run, leading his team in scoring.

The 1938-39 Trail Smoke Eaters would represent Canada at the 1939 World Ice Hockey Championships.

The Trail Smoke Eaters on their 1938-39 European tour set in the annuals of international hockey what is likely to stand for a great many years. They were true ambassadors to the world, and displayed a brand of hockey that saw excellent stick-handling, and superb passing; and with very little body contact.

Everywhere on the Continent, the Smoke Eaters found themselves surrounded by enthusiastic crowds, who literally mobbed them in autograph-seeking fervor, after every appearance. Easily the most colourful team to ever play abroad, the Canadian champions were immensely popular, and their success with foreign fans was tremendous--and at times amazing.

It was generally agreed that their inspiring play did more to promote the game throughout the nine countries they visited, than the efforts of any other single organization.

The Smoke Eaters made only a couple of changes from their Allan Cup team, and made the grueling trip with only 13 players. Coach Elmer Piper left the club for a similar post with the Turner Valley Oilers of the Alberta Senior League, after only spending one season with the Smokies. His position was taken over by Ab Cronie, who doubled as a playing-coach. Captain Dave Duchak also passed up the trip by accepting a job as the playing-coach of the Calgary Stampeders. Art Forrest, a native Trail product, returned after a stint with a hockey team in London, England, and filled in for Duchak. Forrest's trip was short cut, for while the Smoke Eaters were playing a two-game exhibition game series in Lethbridge against the Maple Leafs, on the first leg of their Trans-Canada tour, he was rushed to the hospital for an appendectomy. Benny Hayes, a slick forward with the Lethbridge Maple Leafs, was picked up by the Trail club, and proved himself a valuable member.

The Smoke Eaters only managed one exhibition at home, before starting their 15,000 mile trip, and that was an easy 8-1 victory over the newly formed Trail Blazers. Injuries played a big factor in the Smoke Eaters poor showing across Canada, and they only managed to win eight, tied one game, and lost six in the 15 game series--but they came on strong by winning six of their last seven games in Eastern Canada. They outscored the Canadian teams 65 goals to 41.

The Smoke Eaters embarked from the City of Halifax on 10 December, 1938, and arriving in Scotland, made their first European showing in Glasgow on 17 December, and won the game 4-2. It marked the beginning of a 55-game schedule, in which they won 53 games, tied one, and lost one. The only loss coming by a score of 4-1 in London against an all-Canadian team, the Wembley All-Stars. Benoit counted the only goal for Trail that night.

From the time the Smoke Eaters left Trail, until they returned with the World Championship, they played a total of 71 games - they won 62, lost seven and were held to two draws. Trail scored a total of 374 goals, and were scored on 177 times; their average game scored was 5.3 goals scored and the against average 1.5 - a remarkable record which will probably never be equaled. No official records were kept about each game, but it was said that Benoit scored some 60 goals during that tour and world championships.

The ten-day World Championship Tournament started on February 3, 1939, and was held in Basel and Zurich; two of the greatest little cities perched in the picturesque Swiss Alps. Before the tournament ended on February 12th, the Trail Smoke Eaters had won the hearts of all the Swiss fans, and went about the business of winning the championship in methodical style. Trail sailed through the tournament without a single defeat, and won eight straight games. In fact, they were only scored on once, by Czechoslovakia. The Czechoslovaks proved the toughest team to pass, as the low score indicated. The Smokies met the Czechs in the third round of the tourney, and skated to a convincing 4-1 triumph.

Here's the way the Trail Smoke Eaters marked up their victories: First round they beat the Netherlands 8-0 and Poland 4-0. In the second round they shut out Britain 4-0, and defeated Germany 9-0. In the third and final round they shut out Switzerland 7-0, before 16,000 fans, and continued their brilliant play by stopping Czechoslovakia 4-1, and blanking the United States 4-0. In the eight game finals the Smoke Eaters garnered 42 goals, with Bunny Dame pacing the team with nine goals. Bunny was followed by Joe Benoit and Jimmy Morris, seven; Dick Kowcinak, six; Johnny McCreedy four; Ab Cronie, three; Mel Snowden and Mickey Brennen, two each; and Tom Johnston a singleton. Cronie was the leading player in the assist department with nine; followed by McCreedy with seven. Joe Benoit was the overall point leader with 13.

Duke Scodellaro received real praise for his outstanding goaltending, and the European fans said, "They never saw his equal." Duke had a powerhouse defence playing in front of him: in Jimmy Haight, Tom Johnston and Mel Snowden. Joe Benoit, Ab Cronie and Bunny Dame were Trail's number one line; the Smoke Eaters other forward line consisted of McCreedy, Kowcinak and Brennen. Benny Hayes was used as the utility forward; Buck Buchanan (a former North Battleford Beaver) was the backup goalie to Duke Scodellaro. Buchanan turned in a number of sparkling performances.

O.H. Nelson, President of the Smoke Eaters, made the overseas tour, and acted a manager - and proved himself a most popular man.

The Smoke Eaters certainly advertised the city of Trail. Throughout Europe and by not wearing the customary Canadian white uniform, the club decided to go with their famous, and colourful, orange and black jerseys. Sports writers all over the country were intrigued by the symbols of the Smoke Eater name, and the stacks belching out a stream of smoke, high above the CM&S (Consolidated Mining & Smelting) Smelter.

Benoit played another season in Trail, scoring 26 goals (17 assists) in 24 games and another 2 goals (3 assists) in 4 playoff games, helping the Smoke Eaters win the 1940 Savage Cup as B.C. champions.

Benoit had resisted the NHL before, preferring to stay with the Smoke Eaters. The Toronto Maple Leafs had drafted him in 1939, and he was finally enticed to come east and join the NHL in 1940. By then the Montreal Canadiens had traded Frankie Eddols to Toronto for his rights, and finally got Joe to agree to terms in the fall of 1940 for the princely sum of $1,000.

Joe Benoit took the train east to Montreal’s training camp, becoming one of several rookies incoming coach Dick Irvin added to a team he was rebuilding from the ground up.

The 24-year-old right winger clicked almost immediately, becoming a Forum fan favorite with his spectacular scoring exploits. He made his NHL debut on November 3, 1940 vs the Boston Bruins at the Montreal Forum. Benoit scored his 1st NHL goal vs Paul Goodman of the Chicago Black Hawks at 14:25 of the 2nd in a 4-4 OT tie at Chicago Stadium on November 17, 1940. After a 16 goal rookie regular season, Benoit bulged the twine four more times in the 1941 postseason, scoring more playoff goals than the rest of his teammates combined.

A 20-goal season followed, with Benoit improving the mark to 30 goals in 1942-43, a season that saw him play alongside Toe Blake and Elmer Lach on a precursor to the legendary Punch Line. The line’s top marksman, Benoit finished second only to Chicago’s Doug Bentley among NHL scorers that season. Benoit was the first Canadiens player to reach 30 goals since the legendary Howie Morenz way back in 1929-30.

With three full seasons under his belt, Benoit had 66 goals and 125 points to his credit before duty to his country cost him what were potentially the best years of his career and a Stanley Cup Championship, won by the Canadiens in the spring of 1944.

After giving two years of military service to the Canadian Army during World War II, Benoit returned to the Canadiens but had to switch jersey numbers to #11, as his old #5 had been claimed by Dutch Hiller. He played 39 times for Montreal in the 1945-46 regular season, scoring 9 goals (10 assists), but sustained a back injury late in the season from a vicious hit from Red Wings "Black Jack” Stewart and missed the playoffs entirely.

The Canadiens captured the 1946 Stanley Cup championship, that season and Benoit did get his name engraved on the Cup, as he was a full time member of Montreal.

Benoit started the 1946-47 season with Montreal, playing in six games and 0 points, as he was still struggling from his back injury. His final appearances in the NHL came on November 1, 1946 vs the Maple Leafs. He spent the bulk of the year with the AHL Springfield Indians, scoring 9 goals (10 assists) which would be the last of his career..

Benoit headed to Washington State, where he became coach of the Spokane Spartans for the 1947-48 season there. The Spartans played in the Western International Hockey League / WIHL, which had Benoit's old team the Trail Smoke Eaters among it's teams.

The Spokane Spartans became the Spokane Flyers for the 1948-49 WIHL season, with Benoit coaching them under their new name.

Spokane won the 1949 WIHL championship that season and then competed in the United States Amateur Hockey Association Championships where they defeated the Hibbing Saints, New York Rovers and the Windsor Hettche Spitfires to claim the 1949 championship.

Benoit then coached the Nelson Maple Leafs during the 1949-50 WIHL season.

He remained in Spokane until his death in 1981.

The City of St. Albert honoured Joe Benoit by naming a pedestrian bridge over the Sturgeon River after him....Benoit Bridge.