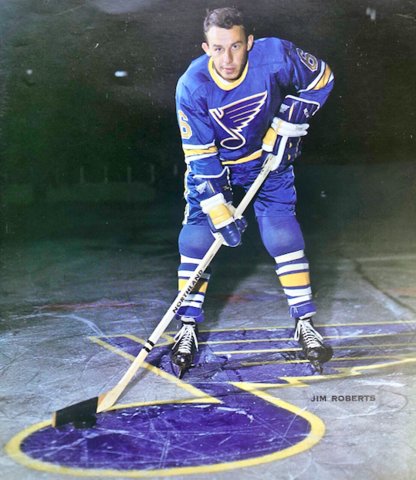 Roberts made his NHL debut with the Montreal Canadiens on February 20, 1963 vs Boston Bruins at The Forum in Montreal in a 3-2 Canadiens win.

Roberts scored his 1st NHL goal vs Jacques Plante of the New York Rangers on November 29, 1964 at Madison Square Garden in a 5-2 Canadiens win.

Roberts was the original Blue, the first player taken by St. Louis in the main segment of the 1967 NHL expansion draft. He was handed No. 6 and became Hockey's original “sixth man,” alternating between defense and forward, sometimes between shifts.

“I want you to stick with that guy everywhere he goes,” Bowman told Roberts. “I want you right next to him, in his face, so close you can tell me what kind of gum he's chewing.”

Toward the end of the first game, Roberts returned to the bench, exhausted from shadowing the mercurial Orr. He looked at Bowman, eager to tell him something, trying to catch his breath. Bowman looked back, impatient for the vital piece of information Roberts was about to share.

Scotty Bowman coached Roberts with Peterborough Petes, St. Louis Blues and traded for him when coaching the Montreal Canadiens. He knew what kind of player Roberts was and wanted him on his teams.