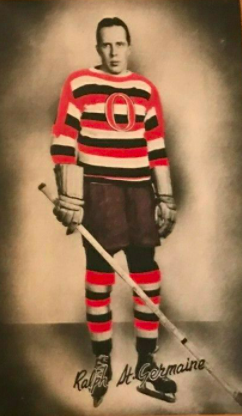 The Maurice Forget trophy was retired and given to St. Germain in perpetuity, he won the QSHL's new MVP award - the Ken Stewart Cup in 1933-34.

St. Germain made the 1936 Canadian Olympic Hockey team as a spare and ended up as their third-leading scorer with 6 goals (5 assists) in six games, helping Canada win a silver medal at the Garmisch-Partenkirchen Olympics.

St. Germain then played for the Ottawa Senators from 1937 to 1940 in the Quebec Senior League.