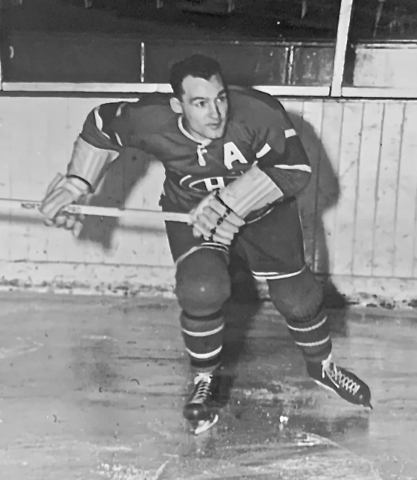 Curry was a consistent scorer while playing for the Generals, excelling in the playoffs, and leading Oshawa to 3 straight Memorial Cup finals, winning the 1944 Memorial Cup championship.

The Montreal Canadiens took notice of Curry and signed him. WWII was in full swing, and curry went to Toronto for 1 season, where he played for the Toronto Navy Hockey team, Toronto Uptown Tires and the Toronto Fuels before heading to Montreal to play for the Montreal Royals of the Quebec Senior Hockey League / QSHL.

Curry starred for the Royals, leading them to 2 straight QSHL championships in 1946 and 1947, and the 1947 Allan Cup championship.

Curry made his NHL debut for the Canadiens on October 18, 1947 vs the Chicago Black Hawks. He scored his 1st NHL goal on March 14, 1948 vs Jim Henry of the New York Rangers at Madison Square Garden.

Montreal sent Curry to their farm team in the American Hockey League, where he played 2 seasons with the Buffalo Bisons. Curry split the 1949-50 season between Montreal and Buffalo before cementing his position with the Canadiens.

Curry scored the game winner in the first game of the 1953 Stanley Cup finals, but his most memorable goals came on a special night at The Forum in Montreal on October 29, 1951, when Princess Elizabeth (soon to be the Queen) was was in attendance, and the Canadiens defeated the New York Rangers 6-1. Curry scored his only NHL hat trick that night.

Curry finished his playing career back with the Montreal Royals as a playing coach for the 1958-59 season. He turned to coaching full time the next season, leading the Royals to the 1960 Tom Foley Memorial Trophy, as champions of the Eastern Professional Hockey League.

The Canadiens offered Curry a job in the front office, and he jumped at the opportunity, working first as director of sales and travel secretary.

Floyd Curry returned to the Canadiens as Assistant Manager. He remained in that position until 1978. He stayed on with Montreal as Director of Scouting for a couple more years.