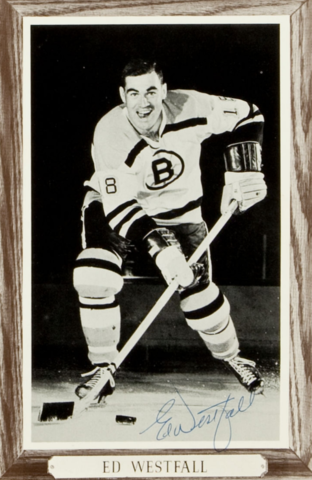 Westfall played his junior Hockey with the Barrie Flyers & Niagara Falls Flyers, and started his professional career with the Kingston Frontenacs (EPHL) team. By 1961 he joined the Bruins, although he had stints the next two years with the Frontenacs and the AHL's Providence Reds. By 1966, he was firmly ensconced on Boston's checking line.

Westfall won the Stanley Cup with the Boston Bruins in 1970 and 1972. He was on the ice on Bobby Orr's famous Stanley Cup-winning goal in 1970. Westfall played in all 14 playoff games, scoring three goals and adding five assists.

The following year the Bruins were an offensive powerhouse, and even defensive specialists like Westfall benefited from playing with the likes of Orr, Esposito, Hodge, and Bucyk. Westfall netted a career-high 25 goals and 34 assists for 59 points. The Bruins seemed like a lock to take their second consecutive Cup. However, a rookie goaltender out of Cornell University had other ideas. A 23-year-old named Ken Dryden, a 6'4" 215-pounder from Hamilton, turned in one of the greatest goaltending performances in NHL playoff history, shutting down the Big Bad Bruins in the semi-finals. From there Montreal went on to defeat the Chicago Blackhawks to win the Cup.

Westfall also scored the second of the three fastest goals in NHL history, when the Bruins scored three goals in 20 seconds in a 1971 game with the Vancouver Canucks. During those seasons he made his reputation as a preeminent penalty killer (generally paired with centre Derek Sanderson or winger Don Marcotte), enough so that he was named to play in the All-Star Game in 1971, 1973, 1974 and 1975.

Westfall was chosen by the brand new New York Islanders in the 1972 NHL Expansion Draft. He was subsequently made the first captain of the team, a position he held until 1977. Westfall scored the first goal in franchise history in their first game against the Atlanta Flames on October 7, 1972. His best season statistically was the 1975, when Westfall led the Islanders into their first playoffs and all the way into the Stanley Cup semifinals, exploding in the playoffs with five goals and ten assists to cap a 22-goal, 55-point regular season.

Westfall remained an effective scorer through the 1977 season, in which he was awarded the Bill Masterton Trophy for perseverance and dedication, after which he relinquished the team captaincy to Clark Gillies. His scoring declined sharply in his final two seasons, during which he spent his time on checking lines and penalty killing.

Westfall retired having played 1226 career NHL games, scoring 231 goals and 394 assists for 625 points, and 4 appearances in NHL All Star games. He was also rewarded for his longevity and love of the game in 1977, when he was selected as the Bill Masterton Memorial Trophy winner.