Why The Stitches on Gerry Cheevers Mask.....give credit to 'Frosty' Forristall 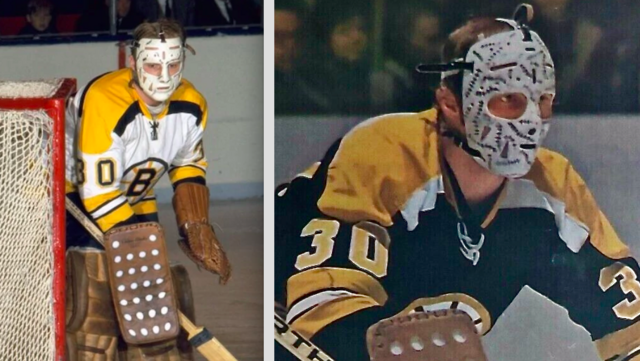 The 1st Iconic Goalie Mask.
Kids grew up wanting the Cheevers’ stitches mask, and it became the most recognizable goalie mask in NHL history.

Cheevers first starting wearing his mask on October 11, 1967 in a 4-4 tie with the Detroit Red Wings.

The original mask itself was made by Ernie Higgins in 1967, and was all white. Higgins would become quite famous himself as a mask maker.

Boston Bruins trainer John 'Frosty' Forristall drew 10 stitches over the left eye of the mask (right eye when looking at mask) during a Bruins practice.

Legend has it that Cheevers was not big on practices, always finding ways to leave the ice. He was hit in the mask by a shot during practice, went to the dressing room for a break and a smoke. Bruins coach Harry Sinden came into the dressing room and said, 'Get back out there, you're not hurt,'"

Cheevers got his stuff together, but before leaving the dressing room, Frosty Forristall grabbed the mask and drew stitch marks above the eye so the coach would know where Cheevers got hit by the puck. Frosty just did it.....It wasn't Cheevers idea.

When he returned to the ice for the practice, the rest of the Bruins thought it was hilarious and Cheevers kept the stitch mark. Cheevers began adding more stitches and stitch extensions to the mask season after season..... every time he took a puck to the face, Cheevers is quoted as saying the stitches is where he got hit by a puck or a stick.

We would like to point out from our research of images of Cheevers mask from 1968 forward, that stitches were changed, removed or repositioned on the mask.

Cheevers made another innovation to the mask that was adapted by most goalies in the 1970’s, and that was to widen the eye slots so he could see the puck better.

Cheevers has said he used one mask his whole career in regular season games. If you look close at images of him playing for Cleveland in the WHA, you can see it's a different mask in some images, and also when he returned to the Bruins in 1975, also having more stitch marks and in different places then his first Higgins mask.

Because of the stitch marks added to his mask, Cheevers became the “father of goalie mask art” back when protective face gear was in the developmental stage and its use in the NHL was optional.

Gerry Cheevers made his Boston debut on October 27, 1965 vs Toronto Maple Leafs at Boston Garden in a 2-1 Toronto win. He played with the Bruins through 1971-72 season, then jumped to the World Hockey Association / WHA to play for the Cleveland Crusaders for four seasons, and then returned to the Bruins for the 1975-76 season and retired after the 1979-80 season. Interesting that Cheevers is not on any team photos until 1967-68, yet he played 5 full games and 2 stints of relief (7 games) in 1965, 22 games in the 1966-67 season.

Cheevers mask was a winner, and so was he as a goalie. Cheevers, while playing junior Hockey for Toronto St. Michael's Majors, won the 1961 Memorial Cup, 1961 J. Ross Robertson Cup and the 1961 George Richardson Memorial Trophy. He then turned pro and played for the Rochester Americans, helping them win the 1965 Calder Cup championship (their 1st).

When he jumped leagues to the WHA for the 1972-73 season, Cheevers got the very 1st WHA Shutout vs Quebec Nordiques on October 11, 1972. He was selected for the 1st WHA All-Star Team and won the 1st Ben Hatskin Trophy as the best goalie in the WHA

Gerry Cheevers was an inaugural member into the World Hockey Association Hall of Fame in 2010.

Canadian pop-punk band Chixdiggit released "I Feel Like Gerry Cheevers (Stitchmarks On My Heart)." in 1996.

In 2008, The Hockey News rated Cheevers mask the greatest ever by a wide margin. It received 221 of possible 300 points; Gilles Gratton's mask was rated second with 66.

NOTE
Cheevers was not the first Bruins goalie to wear a Hockey mask. Bernie Parent, played with the Bruins until 1967, and he wore a Pretzel Goalie Mask made by Jacques Plante company Fibrosport. Parent also wore the number 30........before Cheevers.

Andy Brown, who retired in 1976, was the last North American professional goalie to play without a mask while he was with the Indianapolis Racers of the WHA.