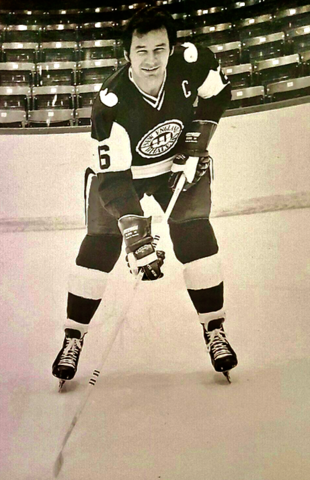 Green played his junior Hockey with the St. Boniface Canadiens, winning the 1958 Turnbull Cup championship. He was picked up by the Winnipeg Braves for their Memorial Cup championship run in the 1959 playoffs..

Green then turned pro with the Winnipeg Warriors of the Western Hockey League, playing almost 2 seasons there, before joining the Kingston Frontenacs for their final 11 games and their 1961 playoffs in the Eastern Professional Hockey League. He also made his NHL debut for the Boston Bruins on November 10, 1960 vs Detroit Red Wings at Boston Garden, picking up a minor penalty in 4-1 Detroit win.

Green would then join the Bruins for the 1961-62 NHL season, scoring his 1st NHL goal vs Jacques Plante of the Montreal Canadiens on October 15, 1961 at 12:48 of the 2nd period in a 5-5 tie at Boston Garden. He would play in Boston until the Bruins won the 1972 Stanley Cup championship.

Green was known around the Hockey world as "Terrible" Ted Green, the tough-looking and acting defenceman from Manitoba who liked to mix it up with the best the NHL could throw at him. He amassed more than 100 penalty minutes in six of his seasons with the Bruins before a life-threatening, stick-swinging incident with St. Louis Blues Wayne Maki in an exhibition game, kept him out of the 1969-70 season and left him with a metal plate inside his head. Maki and Green were both charged with assault as a result of the incident, the first time NHL players faced charges as a result of on-ice violence; both were acquitted. Green was suspended by the NHL for 13 games. Though Green did not officially win the Stanley Cup, his teammates gave him his share of the prize money, and his name was also engraved on the Stanley Cup in 1970.

Green then joined the upstart New England Whalers in the World Hockey Association / WHA inaugural season of 1972-73, being named their first captain and leading the team to the WHA's inaugural league championship the Avco World Trophy / Avco Cup. After three seasons with the Whalers, he was traded to the Winnipeg Jets, winning the Avco Cup again in 1976 and 1978.
He finished his playing career in 1979 with the Jets.

After his retirement, Green coached the intermediate Carman Hornets to a Manitoba provincial title in 1979–80. He then joined the Edmonton Oilers as an assistant coach under close friend Glen Sather, who had played alongside him in Boston from 1967 to 1969. He won five more Stanley Cups in 1984, 1985, 1987, 1988, 1990 (7 in total). He was named head coach of the Oilers in 1991, just as the Oilers' 1980s championship years were ending, though he led the team to the conference finals in 1992. With the Oilers' dynasty disintegrating, they missed the playoffs altogether in 1993—the first time they had been out of the postseason as an NHL team. Following a slow start in the 1993–94 NHL season, Sather fired Green 24 games into the season

Edward Joseph (Ted) Green is a Honoured Member of the Manitoba Hockey Hall of Fame, inducted in 1985.

Ted Green was inducted into the Manitoba Sports Hall of Fame and Museum in 2003.

Ted Green is a inaugural member of the World Hockey Association / WHA Hall of Fame.