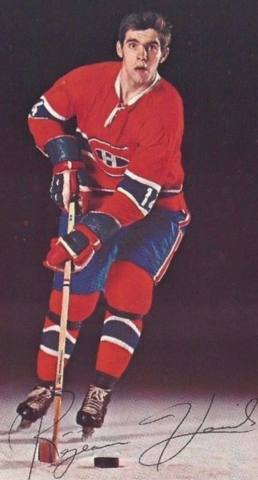 Houle played some his junior Hockey with the Thetford Mines Canadiens, being a top goal scorer on the team, and leading them to the Eastern finals for the 1967 Memorial Cup, losing to the Toronto Marlboros.

Houle then joined the Montreal Jr. Canadiens for the 1967-68 season, scoring 39 goals in 55 games, which included 12 goals in 11 playoff games. Houle's final year of junior Hockey in the 1968-69 season is one for the record books, as he averaged exactly two points per game, scoring 53 goals and 55 assists fn 54 games for 108 points, playing on a line with Gilbert Perreault. Houle continued this scoring streak in the playoffs, scoring 19 goals in 22 playoff games, including 6 goals, 2 assists in 8 Memorial Cup playoff games, leading the Montreal Jr. Canadiens to the 1969 Memorial Cup championship, and winning the 1968-69 Eddie Powers Memorial Trophy as the Ontario Hockey League's player scoring the most points in the regular season.

Houle was then drafted 1st overall by the Montreal Canadiens, but only played in 9 NHL games during his first pro season, scoring a single point. The rest of the season he played in the AHL with the Montreal Voyageurs, where he had 25 points in 27 games.

Houle played three more seasons with the Canadiens, and although he played on two Stanley Cup winning teams, in 1971 and 1973, where he was mostly used as a checker, including his masterful job of shutting down Bobby Hull in the 1971 final. Houle was looking for more, and seeking financial security for his family, Houle jumped to the World Hockey Association / WHA for the 1973-74 season where the Quebec Nordiques offered him a sizable wage increase and a better chance to be a star player. He would score 118 goals in 214 games for the Nordiques, including 51 goals, 52 assists in 81 games during his final season for the Nordiques.

Houle rejoined the Canadiens in 1976-77 and scored 52 points in 65 games, as a determined forechecker and ace penalty killer. Houle and the Canadiens had a successful run through the playoffs, defending their Stanley Cup championship from a year earlier by beating the Boston Bruins in the finals. The two clubs met again in the 1978 Staley Cup finals, with the same result. In 1979, Montreal won their fourth Staley Cup in a row, beating the New York Rangers in the final four-games-to-one. Houle played another four years with the Canadiens, retiring after 16 games into the 1982-83 season at the age of 33.

After retiring, Houle became an executive with Molson Breweries and the then-owner of the Montreal Canadiens organization. A disastrous start to the 1995–96 season resulted in then general manager Serge Savard and head coach Jacques Demers termination. The team saw Houle, with his business background and history with the team, as the most viable replacement candidate. Houle was offered the job as general manager of the Montreal Canadiens.

Just six weeks into the job, Houle was faced with a monumental crisis. Montreal's star goaltender Patrick Roy, who had been feuding with the new head coach Mario Tremblay, and soon after Roy was yanked from a game that Canadiens fans will never forget, told team president Ronald Corey that he had just played his final game for Montreal.

Houle made his most infamous trade on December 6, 1995. In what became known as, “Le Trade,” Houle sent Patrick Roy and team captain Mike Keane to the Colorado Avalanche (Quebec Nordiques) for Jocelyn Thibault, Martin Ručinský, and Andrei Kovalenko. Now, some people have defended Houle on this one, pointing out that Roy had demanded a trade, so Houle’s hands were tied. But Roy didn’t actually demand a trade. What Roy said was that he would never play for head coach Mario Tremblay again. Tremblay was hired as head coach at the same time that Houle was, and he and Roy did not get along, going all the way back to Roy’s rookie year when then-player Tremblay would mock and haze Roy. Firing coaches at player’s demands can set a bad precedent, but as GM, it was in Houle’s corner to fire Tremblay. And he should have done so. Tremblay was a rookie coach and Roy was the team’s best player and the league’s best goalie.

Following this trade, he dealt-away marquee players including Mark Recchi, Vincent Damphousse and Pierre Turgeon in exchange for players of little value to the team. He was also criticized for frequently trading with non-contending teams, being unable to land widely coveted free agents and for signing marginal players to inflated contracts. Houle's drafting of players was considered even worse.

Houle was fired from his general manager position two months into the 2000–01 season and replaced by André Savard.