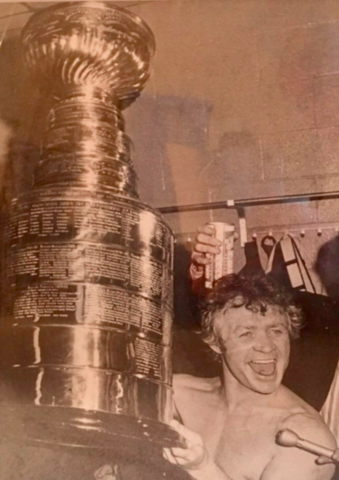 McKenzie played his early junior Hockey in Alberta, first with the Calgary Buffaloes in the 1953-54 season, then the Medicine Hat Tigers in 1954-55. McKenzie then traveled east, playing with the St. Catharines Teepees from 1956 to 1958, and led the OHA-Jr. league in goals and points in the 1957-58 season with 48 goals, 51 assists.

Mckenzie made his NHL debut in the 1958–59 season with the Chicago Black Hawks, playing in 34 games for the Black Hawks, while also playing 13 games for the WHL Calgary Stampeders. When McKenzie arrived in the NHL in 1958, he was sporting the rather cruel nickname "Pie". "There used to be a chocolate bar in Canada quite a few years ago," he recalled. "It was called 'Pie Face'. The logo had a little, wee body with a larger head. Gerry Melny said, 'Gee, you look like that Pie Face.' So that's how it started."

McKenzie was then claimed by the Detroit Red Wings from Chicago in the Intra-League Draft, June 10, 1959, and played for 2 seasons in Detroit, but was demoted to the Red Wings minor league affiliate, the AHL Hershey Bears from 1960-62.

McKenzie was the traded back to Chicago by Detroit with Len Lunde for Doug Barkley, June 5, 1962, and sent to their minor league team, the AHL Buffalo Bisons for the 1962-63 season, and was named to the league's First All-Star Team in 1963. McKenzie scored 35 goals, 46 assists during that season in Buffalo, and another 8 goals, 12 assists in 13 playoff games, as he led the Bisons to the 1963 Calder Cup championship.

McKenzie returned to the NHL and the Black Hawks for the 1963–64 season, and two years later was traded to the New York Rangers by Chicago with Ray Cullen for Tracy Pratt, Dick Meissner, Dave Richardson and Mel Pearson, June 4, 1965.

McKenzie was traded to the Boston Bruins by the Rangers for Reggie Fleming, January 10, 1966, and it was with the Bruins that the 5-foot-9-inch, 170 pound (77 kg) right winger had the most productive seasons of his career. He became a star for the Bruins in the 1967-68 season, being teamed up with with Fred Stanfield and Johnny Bucyk, which allowed him to blossom into a valuable part of the club as an agitator and scorer. His scoring totals were also given a lift through his regular spot on the powerplay with Bucyk and Esposito. McKenzie scored twenty-eight goals and gaining a reputation as a pesky, relentless hustler. He scored twenty-nine goals each of the next two seasons, and was named to the Second Team All-Star in 1969–70. In the playoffs that year he scored seventeen points in fourteen games, fourth on the team after Bobby Orr, Phil Esposito and John Bucyk and did so again in 1971-72. His best season was 1972–73, when he scored 31 goals and 77 points in 65 games.

McKenzie described his approach to Hockey to writer Andy O'Brien once.

"I guess what it boils down to is my custom at the start of games. I like to take a run at somebody on my first shift just to stir things up and plant the idea that if a squirt like me can go after 'em - particularly if my target is a big star - then why not everybody - I try to act the same way when were sagging in a tight game."

All in all, McKenzie scored 169 goals in his seven years in Boston and helped the Bruins win two Stanley Cup championships, in 1970 and 1972.

The end of the sixth and last game in the 1972 Stanley Cup finals, when the Bruins defeated the New York Rangers at Madison Square Garden to take the Cup, McKenzie skated to center ice, raised one arm in mimicry of the Statue of Liberty, placed his other hand around his neck to appear as though he were choking, then jumping up and down in a circle several times. Thus he implied, to the Rangers and their fans, that the Rangers had choked at their best chance of winning their first Stanley Cup since 1940). This became known as the "McKenzie Choke Dance," or simply the "choke dance."

In the summer of 1972, McKenzie was disgruntled at being left unprotected in the expansion draft, and he signed as player-coach with the Philadelphia Blazers of the newly formed World Hockey Association / WHA. In thirteen games he recorded only two wins and eleven losses, and he stepped down as coach in favor of veteran Phil Watson. He continued to play effectively for the now WHA Vancouver Blazers, and was selected to play for the 1974 WHA Summit Series team vs the Soviet Union

In 1975, McKenzie signed with the WHA Minnesota Fighting Saints, then signed as a free agent by the WHA Cincinnati Stingers after the Minnesota franchise folded, February 27, 1976.

McKenzie was then traded to the WHA New England Whalers with Dave Keon, Steve Carlson, Dave Dryden and Jack Carlson for future considerations (Dave Debol, June, 1977), Dan Arndt and cash, January, 1977. McKenzie finished his playing career in the WHA in 1979, and the Whalers retired his No. 19 jersey.

In 2010, John McKenzie was elected as an inaugural inductee into the World Hockey Association Hall of Fame in the “Legends of the Game” category.