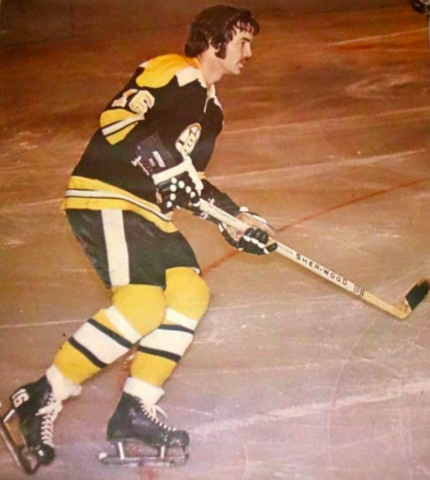 Sanderson grew up playing Hockey on a home made rink his father built in their back yard in Niagara Falls. His dad Harold also coached and trained him throughout his early years, using a book by Lloyd Percival "The Hockey Handbook" as a training manual.

At age 12, Sanderson craved a pair of CCM Tacks, the leather skate of choice for NHL players. They cost $100, one month's salary for his father, who scrimped and saved to buy them, but not before making a deal with his son: In exchange for the skates, Derek would give his dad his Stanley Cup ring when, not if, he won one.

Sanderson would play his junior Hockey with the hometown Niagara Falls Flyers, playing just 3 games (0 points) for them in the 1962-63 season as a 16 year old - 2 during the regular season and 1 in the Memorial Cup finals. He would then be a regular for the Flyers the next season, scoring 12 goals (15 assists) in 42 games.

Sanderson would start to to become a well rounded Hockey player during the 1964-65 season, scoring 19 goals, 46 assists and leading the Flyers in penalty minutes with 128, becoming known for his scrappy play. The Flyers went on to win the 1965 George Richardson Memorial Trophy as Eastern Canadian junior Hockey champions and a birth in the Memorial Cup championship series vs the Edmonton Oil Kings. Sanderson scored 9 goals, 8 assists in 11 playoff games, but he was suspended in game 3 of the Memorial Cup after pummelling Edmonton captain Bob Falkenberg, who was taken off the ice on a stretcher. Following the game, it was revealed that Sanderson was hauled into a room (believed to be a broom closet) while en route to his team’s dressing room. He was left with facial lacerations and body bruises. Police investigated but no arrests were made. The Flyers regrouped without Sanderson in their lineup, and won the next 2 games to win the 1965 Memorial Cup championship.

Sanderson had a strong season for the Flyers the next year, scoring 33 goals, 43 assists during the regular season, and being a league leader in penalty minutes with 238. He also made his NHL debut for the Boston Bruins on December 11, 1965, at Maple Leaf Gardens vs the Toronto Maple Leafs, and a second game with the Bruins on December 28, going scoreless in both games. Sanderson finished the season with the Oklahoma City Blazers of the Central Professional Hockey League / CPHL, where he scored 1 goal in two regular season games, and had 4 assists in 4 CPHL playoff games.

Sanderson would finish his junior Hockey career on a high note in the 1966-67 season, scoring a career high 41 goals and 60 assists in the regular season, winning the 1967 Eddie Powers Memorial Trophy as the top scorer in the Ontario Hockey Association / OHA, also playing 2 games for the Bruins on November 26 & 27, 1966. He was also selected for the OHA Junior All-Stars team that played against a team from Czechoslovakia in December, 1966.

Sanderson joined Boston full time for the 1967-68 season, scoring 24 goals, 25 assists during the season, winning the 1968 Calder Memorial Trophy as the NHL Rookie of the Year. The honour gave Boston back-to-back Rookies of the Year, as Bobby Orr won the award in 1967. It remains the only time in Bruins' history that the team has had consecutive Calder Trophy winners. Sanderson scored his 1st NHL goal on George Gardner of the Detroit Red Wings on October 19, 1967.

Sanderson had 98 penalty minutes / PIM during his rookie NHL season, helping him establish himself as a league tough guy, who could also score. In the 1968-69 season, he increased his PIM to 148, while also scoring 26 goals (22 assists) in the regular season, and 8 goals, 2 assists in the playoffs, helping the Bruins reach the 1969 Stanley Cup semi-finals.

Sanderson was also influencing personal fashion in the NHL, as he was known for his flashy playboy lifestyle with a wardrobe straight out of Mod Squad, a hit T.V. show at the time. Soon, teammates Ted Green, Gerry Cheevers, Phil Esposito and Bobby Orr all joined the Sanderson fashion parade, and many players from others teams would soon start their own fashion quest.

Named by Cosmopolitan magazine as one of the sexiest men in America, Sanderson was the subject of gossip columns, a frequent guest on television talk shows, and regularly photographed in the company of numerous beautiful women.

Although he had been a leading scorer in junior Hockey, his role on the high-scoring Bruins team was to centre their defensive line with wingers Ed Westfall and Don Marcotte. The line excelled at killing penalties. In the 1969-70 season, Sanderson still scored 18 goals (23 assists) in the regular season, and in the 1970 Stanley Cup playoffs, Sanderson scored 5 goals, 4 assists. The Bruins faced the St. Louis Blues in the Stanley Cup Finals. Boston led the series three games to none, and the fourth game required overtime, tied 3-3. 40 seconds into overtime, Bobby Orr scored the game-winning goal, clinching the Bruins' first Stanley Cup in 29 years. Orr's goal went on to become one of the most famous goals in Hockey history, and it was Sanderson who assisted on that goal.

Sanderson went on to give his father his Stanley Cup championship ring, something he promised when he was 12 years old.

In the 1970-71 season, Sanderson scored a NHL career high 29 goals (34 assists), helping the Bruins set the mark for most goals by a team (399) by nearly a hundred over the previous record holder. They also set records for most victories (57) and points (121). The Bruins won the 1970-71 Prince of Wales Trophy as East Division regular season champions, but the Montreal Canadiens defeated Boston in the first round of the 1971 playoffs.

Although they had fallen somewhat from their overwhelming offensive dominance from the previous season, once again the Boston Bruins had the best record in the league for the 1971-72 season, and winning the Prince of Wales Trophy again. Sanderson scored 25 goals, 33 assists in the regular season, and only 1 goal, 1 assist in the playoffs. His only goal came in the first game of the finals, as Boston defeated the New York Rangers in 6 games to win the 1972 Stanley Cup championship.

In the summer of 1972, Sanderson made sports headlines when he signed what was then the richest contract in professional sports history. The Philadelphia Blazers of the World Hockey Association / WHA signed Sanderson to a $2.6 million contract, making him the highest-paid athlete in the world at the time. The Bruins were fresh off of their second Stanley Cup championship in three years, and they were rocked by the news that the upstart WHA Philadelphia Blazers signed their star centre.

Sanderson's time with the Blazers was disastrous, as he injured his shoulder and had a serious knee injury early in the season, scoring just 3 goals, 3 assists in 8 games, and now unable to play. In February 1973, the Blazers shocked the sports world again. The owners of the Blazers became impatient with Sanderson and decided the best thing to do, would be to return Sanderson to the NHL. He was given 1 million dollars to leave the team and go back to the Bruins.

Sanderson played for the Bruins until midway through the 1973-74 season, playing only 54 regular season games out of a possible 156. The Bruins, seeing no future for Sanderson, sent him down to the American Hockey League / AHL with the Boston Braves for three games before trading him to the New York Rangers.

Meanwhile, in a distraction from his Hockey career, along with New England Patriots receiver Jim Colclough, and the New York Jets star football quarterback Joe Namath, Sanderson opened "Bachelors III", a trendy nightclub on New York City’s Upper East Side. Negative publicity over some of the club's less than reputable patrons led to problems and eventually Sanderson had to get out of what went from a "goldmine" to a money-losing venture.

Although Sanderson had a good first season with the Rangers by scoring 25 goals (50 points) in 75 games, he was traded eight games into the 1975-76 season to the St. Louis Blues. In St. Louis, Sanderson set career highs in assists and points scored in a season with 43 assists and 67 points, but problems with alcohol and his recurring knee problems led Blues management to trade him in 1976-77 to the Vancouver Canucks. Struggling with his addiction to alcohol, Sanderson managed to score 7 goals (16 points) in 16 games with the Canucks, but he was still sent to the minors (Kansas City Blues). As was the case with the Blues, the Canucks' impatience with Sanderson's struggle with alcohol and his knee problems led them to the decision not to re-sign him.

The Pittsburgh Penguins signed Sanderson as a free agent in 1977-78; he played 13 games with the Penguins and eight games in the minors (Tulsa Oilers/Kansas City Red Wings) before retiring.

During his career, Sanderson made many bad investments and lost millions of dollars; he was broke when he retired and had substance abuse problems. He wound up penniless, one time sleeping on a New York City park bench, and in poor health. Several years after Sanderson's retirement, Bobby Orr spent his own money to check Sanderson and several other former Bruins into rehab. Sanderson entered rehab in 1979, beat his addictions, and took a job as a professional sports broadcaster, working for ten years with New England Sports Network.

Wanting to make sure that other Hockey players would not follow his path, Sanderson organized The Professionals Group at State Street Global Advisors, where he was Director of The Sports Group that provided professional financial advice to athletes in the 90s.

In the Acknowledgements for his second autobiography, Crossing the Line: The Outrageous Story of a Hockey Original, written with Kevin Shea, Derek wrote, "Through family, friendships and faith - discovering there is something stronger than all of us - I was able to reconstruct my life. The people who really cared gave me the strength to get back on my feet, and I am eternally grateful."