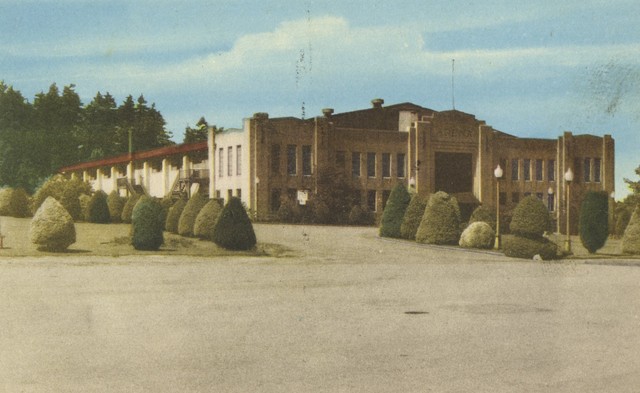 Queen's Park Arena is a 3,500 seat multi-use arena located in New Westminster, British Columbia, Canada. It was built in 1930 and opened on September 19. It once hosted the New Westminster Bruins of the Western Hockey League.

During one four-year stretch in the mid 1970s the New West Bruins won four consecutive Western Hockey League titles. The team also advanced all the way to the title game of the Memorial Cup Canadian major junior Hockey championship in each of the four years, winning it twice. In the 78-year history of the Memorial Cup, only seven teams have won it in back-to-back years. The Bruins were the first Western Hockey League club to accomplish that feat when they hoisted the trophy in 1977 and 1978.

While the name Bruins has been synonymous with the Western Hockey League since its very beginning, the New Westminster Bruins' chapter in the league's history is somewhat shorter. The Estevan Bruins were one of the original teams that formed the Western Canada Hockey League in the mid-1960s. The team relocated to the Vancouver suburb of New Westminster in 1971, and began the climb that would see them become one of the most successful - and most talked-about - teams in league history.

It also has hosted the New Westminster Lacrosse for over 75 years, and has a wooden floor for lacrosse, which is well known by its green colour. Recently, the city has paid to have the score clock, 30 second clock, floor, and goal nets replaced.

The exterior of "Queen's Park Arena" makes an appearance in the movie "Miracle" about the USA's 1980 Olympic ice hockey team where the arena plays the part of the Hockey arena in Norway where the US team played the Norwegian national team.