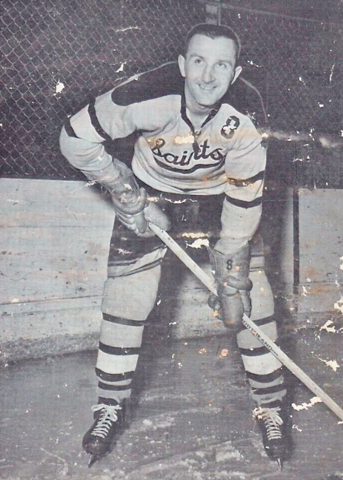 Kukulowicz, who at age 16 was 6"3" and 180lbs was sought out by every team in the NHL. When Hockey agents showed up at his Winnipeg home to try and sign him, he was nowhere to be found. In fact, he was hiding under his bed at the instruction of his mother, who felt he was too young to begin a career in Hockey. But the temptation proved too much and he appeared in the kitchen, where the agents were waiting. In 1949, Kukulowicz signed a contract with a signing bonus of C$7,500, and was sent to develop in junior ice Hockey.

While playing for Quebec Citadelles, Kukulowicz made his NHL debut with the New York Rangers on January 7, 1953 vs Chicago Black Hawks at Madison Square Gardens in a 6-4 Chicago win. During this game, Kukulowicz scored his 1st NHL goal vs Gump Worsley at 7:56 of the 1st period.....a power play goal.

Kukulowicz played 3 games for New York that January before being sent back to Quebec. He played 1 NHL game for New York in 1954, apparently injuring his back on a body check......he never played another NHL game.

Kukulowicz did continue playing, and on some very good teams in the Western Hockey League / WHL for the next 6 seasons,
once losing in the President's Cup (Lester Patrick Cup) final to the Brandon Regals in 1957.

Still hungry for the pro game, Kukulowicz signed with the St. Paul Saints of the International Hockey League / IHL for the 1959-60 season. He helped the Saints win back to back Turner Cup championships in 1960 and 1961.

Kukulowicz played his final season of pro Hockey with the Minneapolis Millers for the 1961-62 IHL season.

Kukulowicz then returned to his hometown, joining the Winnipeg Maroons, helping them win back to back Patton Cup championships in 1963 and 1964 and the 1964 Allan Cup championship on home ice.

After retiring as a player, Kukulowicz accepted a offer to coach in Poland, due to his ability to speak the Polish language fluently combined with his playing experience. He served as coach of GKS Katowice in the Polska Hokej Liga during the 1965–66 Polska Liga Hokejowa season, and then decided to leave Hockey altogether.

Improbably, Kukulowicz took a job as a baggage handler with Air Canada. While lugging suitcases and boxes sounded tremendously unpromising, Kukulowicz transformed the job into a once-in-a-lifetime opportunity. It all started one day at work, when a request came over the intercom system asking if anyone spoke Polish. Three hours later, Kukulowicz was acting as an interpreter between the prime ministers of Poland and Canada, helping to secure a major wheat deal.

Air Canada soon learned that he was also fluent in Ukrainian, Czech and Russian. Duly impressed, airline officials decided to make him their man in Russia. He had been a baggage-handler for just one year at that point.

It was the height of the Cold War and paranoia ran high. At one point, while embassy staff were repainting the apartment, listening devices were discovered in the walls. Kukulowicz was also followed. Everywhere he went, he was shadowed by a KGB agent; not once in six years did the two men speak.

In 1969, he met Mr. Alan Eagleson for the first time. The Toronto lawyer was in Moscow to begin discussions on what would evolve into the 1972 Summit Series and he needed a translator. As a former NHL player, Kukulowicz was the ideal man for the job. "Aggie was part and parcel of it from the very first day," Alan Eagleson recalled.

During the series itself, the Canadians ribbed Kukulowicz that he was a spy for the Russian team because he was so close to the Russians, but, as Alan Eagleson notes, "He was Canadian through and through." Near the end of the series, Alan Eagleson, Kukulowicz and John Ferguson, the assistant coach of Team Canada, were locked in furious negotiations with the Russians over referees for the final game. It was Canada's turn to choose the officials and the Russians wouldn't agree. While Kukulowicz translated, the pitch of the debate rose.

Shouting and screaming ensued and finally, in a rage, John Ferguson grabbed a pitcher of ice water and flung it against the wall. Stricken, Kukulowicz turned to Alan Eagleson and said, "Alan, how do I interpret that to the Russians?"

Alan Eagleson chuckled at the memory. "That's how he was. He. thought, 'Jeez, how am I going to explain this to them?' "

In the end, agreement was reached and the storied Canada-Russia Hockey Summit Series culminated in Paul Henderson's historic winning goal.

Kukulowicz was also the interpreter for the 1974 Summit Series.

Kukulowicz then settled in Toronto, Ontario where he became the manager of sporting sales for Air Canada. In that capacity, he marketed the airline to sports teams to attract their business. Even while he was working for Air Canada, Kukulowicz continued to interpret for and help negotiate on behalf of the International Ice Hockey Federation / IIHF.

Kukulowicz worked as an interpreter for the IIHF from 1975 to 1993, which included the annual Ice Hockey World Championships. He attended all five Canada Cup tournaments from 1976 to 1991, and was able to provide sports broadcasts with information on Soviet players who were not well known at the time. During a pre-taped interview on Hockey Night in Canada for the Super Series '76, he translated while off-camera and speaking into an earpiece worn by Valeri Kharlamov.
Kukulowicz translated at the 1980 Super Series, and acted as a liaison between the NHL and the Soviet teams. He also coordinated trips for NHL teams going to the Soviet Union, and was a reference for hotels, meals and cultural programs.

The highlight of his career may very well have been in August, 2007 when he returned to Russia for the 35th anniversary
of the 1972 Summit Series. Alan Eagleson and former NHL president John Ziegler joined Kukulowicz at centre ice. Russian players from the series assembled to shake Alan Eagleson and John Ziegler by the hand. When they came to Kukulowicz, they hugged and kissed him like a brother.

Aggie Kukulowicz was honoured by the IIHF with the Paul Loicq Award in 2004, which honour a person who has made "outstanding contributions to the IIHF and international ice Hockey"