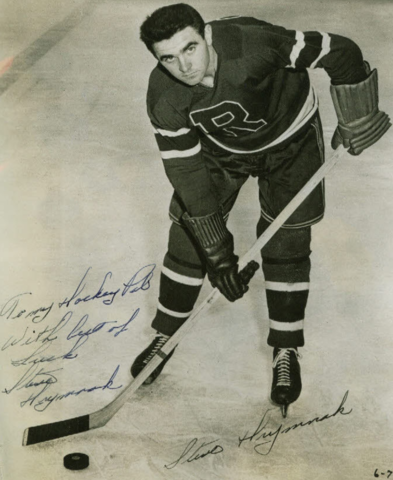 Hrymnak played amateur Hockey for the local juniors and Port Arthur Flyers before spending the 1944-45 season in military service. After World War II, he spent another season with the Flyers before turning pro with the New York Rovers of the EHL.

In 1947-48 Hrymnak joined the New Haven Ramblers that began a six-year association with the AHL. During this period he was recalled to play 18 games for the Black Hawks in 1951-52 then, after a trade, he suited up for two playoff games in Detroit the next year.

Most of his twelve professional seasons were spent in the minor leagues. Hrymnak was described as a good playmaker and conscientious centerman, though his offensive totals were never spectacular.

After playing 2 season with the New Westminster Royals of the WHL from 1956 to 1958, Hrymnak returned to Port Arthur where he played for the Bearcats, captaining them to the 1962 Ahearne Cup championship in Sweden.