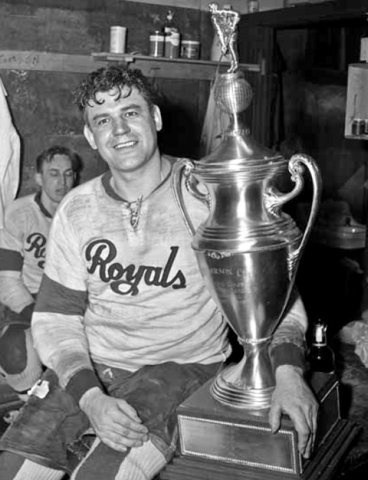 Pratt grew up in Winnipeg, a hotbed of ice Hockey in the Winter. He learned to skate on his fathers skate at the age of six, and by age 8, had his own skates and was learning to play Hockey on the Frozen Red River and/or the Assiniboine River.

Pratt later played his PeeWee and midget level Hockey at the newly built Winnipeg Olympic rink, a large red brick building known as the barn, that produced many top level Hockey players there, and was known as the coldest rink in the country, even though it was indoors, but the ice surface was frozen by the outdoor temperature.

Pratt got his nickname "Babe" from playing baseball as a kid, as someone compared his play to Babe Ruth, and the name just stuck.

Pratt turned into quite the big boy, growing to 6'3" in height and always over 200lbs. As a defenceman, he would rush the puck with ease, which later helped define his career as a Hockey player.

In 1933, Pratt played for five teams in his Winnipeg area - high school, church league, juvenile, a senior league team and the local commercial league. Amazingly, every team won a championship that season.

Pratt might not have played in a Memorial Cup final, but he did witness what it takes to win a National championship, as in both 1934 and 1935, his hometown of Winnipeg was the host to the finals of the Memorial Cup championship, and you know he was there watching and learning.

Pratt received a invitation in 1935 to attend training camp for the Canadian Olympic team. There had been problems with the team from Halifax that was supposed to go, and instead a team from Port Arthur, Ontario was going to represent Canada, and they were looking for offensive players. Pratt decided to turn pro instead.

Pratt signed with the NHL New York Rangers for the !935-36 season, and they first sent him to their farm team, the Philadelphia Ramblers. He played there for 2 months before being called up to New York, playing his 1st NHL game on January 28, 1936 vs the Montreal Canadiens at Madison Square Garden. Pratt had a penalty called on him during the game.

Pratt scored his 1st NHL goal on February 27, 1936 vs Normie Smith of the Detroit Red Wings in a 4-2 loss at the Detroit Olympia. That was his only goal for the Rangers that season, and after 17 NHL games, they sent him back to Philadelphia to finish the season.

Pratt was back with the Rangers to start the next season, and would be in their lineup for the next 6 NHL seasons. He had a solid first full season in New York, scoring 8 goals (7 assists) in the regular season, and another 3 goals in the playoffs, as the Rangers made it to the 1937 Stanley Cup finals. Pratt scored the overtime winner vs the Maple Leafs in the first round, and then he scored the game winner in the first game of the semi-final series vs the Montreal Maroons. Pratt had a goal in the final series that the Red Wings won.

The Rangers had a solid 1939-40 season, and would make the finals again. Pratt scored 3 goals in the playoffs, including a game winner vs Boston in the semi-final and a goal and assist in the finals vs Toronto, as New York won the 1940 Stanley Cup championship.

Pratt was always a joker to his teammates, and his sharp wit he shared with everyone. In Frank Boucher's book "When The Rangers Were Young" he wrote - "I remember once in the playoffs -- Babe and his teammates were getting no breaks whatsoever from King Clancy, who became a top referee when he retired as a player. There were two men in the penalty box and Babe was backtracking quickly after ragging the puck and then losing it. He collided with Clancy, inadvertently or otherwise, and knocked King from his feet. As Clancy scrambled quickly up, he snapped ominously at Babe, 'I'd like to be playin' against you tonight, Pratt.' Babe looked toward his teammates in the penalty box and then returned his glance.

Pratt played for the Rangers until the start of the 1942-43 season, when they suddenly traded him to the Toronto Maple Leafs. Conn Smythe had wanted Pratt and his physical presence and scoring ability, something the Maple Leafs were in need of on their blue line.

Pratt fit right in on the Maple Leafs, having the most productive years of his career under the guidance of coach Hap Day, who liked his offensive style of play and allowed him to rush the puck at will, which he had done since a teenager.

Pratt had a career best 57 points (17 goals) in 50 games during the 1943-44 season, and was voted as the most valuable player in the NHL, winning the Hart Memorial Trophy and being selected to the NHL First All-Star team.

Pratt followed up the next season with a NHL career high 18 goals (23 assists). He scored only 2 goals in the playoffs, but his last goal of the season was scored on April 27, 1945, at 12:14 of the 3rd vs Harry Lumley of the Detroit Red Wings and it was the 1945 Stanley Cup winning goal.

In January, 1946 Pratt was caught betting on Hockey games and was subsequently suspended from the NHL. Initially the banishment was forever, but Pratt later admitted his ways and promised not to do them again. After missing 9 games, Pratt was reinstated.

Pratt, a handsome guy who liked to party, had been on a few year roll now in Toronto and Conn Smythe was not a supporter of that life style, so after the 1945-46 season, he traded Pratt to the Boston Bruins. Pratt played 31 games for the Bruins, scoring just 4 goals, before they sent him down to the American Hockey League / AHL Hershey Bears. Pratt fit right into the Bears team, scoring 5 goals (10 assists) to end the season, then scored 3 goals (5 assists) in the playoffs, helping Hershey win the 1947 Calder Cup championship.

Pratt split the 1947-48 season between Hershey and the AHL Cleveland Barons, scoring just 3 goals in the season.

Pratt then headed to the west coast, signing with the New Westminster Royals of the Pacific Coast Hockey League / PCHL. Pratt was a playing coach with the team, and would lead them to winning the 1950 Phil Henderson Cup as champions of the PCHL.

Pratt played for the Royals from 1948 to 1951, the joined the PCHL Tacoma Rockets for 1 season to finish his playing career.

Pratt had 6 assists vs the Boston Bruins on January 8, 1944. Not a NHL record, as there are 4 players with 7 assists and 25 with 6 assists, but only 6 defencemen in total.

Pratt later became the first employee of the NHL Vancouver Canucks in 1970, settling into assistant to the vice president role with the team. The Canucks had been playing for years in the PCHL, and needed a high profile person to promote them in the NHL.

He subsequently worked as an analyst for CBC Television's Hockey Night In Canada telecasts from Vancouver in the 1970s and served as a goodwill ambassador of the Vancouver Canucks. Pratt collapsed and died of a heart attack in the media lounge of the Pacific Coliseum in Vancouver during the first intermission of a Canucks game on December 16, 1988. The Canucks honored Pratt's memory by stitching "BABE" on their sweaters for the remainder of the Hockey season.

The Babe Pratt Trophy was first awarded for the 1972–73 season as the Premier's Trophy. After the death of the Canucks goodwill ambassador Babe Pratt, the trophy was renamed in honour of him for the 1989–90 season. Originally, the trophy's recipient was decided by local media, but is now decided by fan vote.

Pratt was considered one of the best offensive defensemen in Hockey history until Bobby Orr arrived in the NHL in 1966, the same year Pratt was inducted into the Hockey Hall of Fame.

Walter "Babe" Pratt was inducted into the Hockey Hall of Fame in 1966.

Walter "Babe" Pratt was inducted into the Manitoba Sports Hall of Fame and Museum in 1990.

In 2000, he was voted to Manitoba's All-Century First All-Star Team.