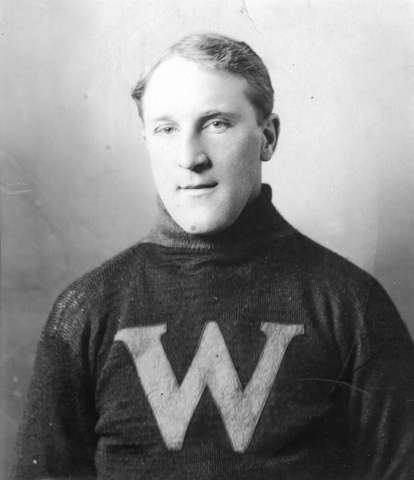 Thomas Ernest "Ernie, Moose" Johnson (February 26, 1886 - March 25, 1963) was a Canadian ice Hockey player whose professional career spanned from 1905 to 1931. He was a member of four Stanley Cup winning teams between 1905 and 1910 with the Montreal Wanderers of the Eastern Canada Amateur Hockey Association (ECAHA) and later the National Hockey Association (NHA). He moved west, and switched from left wing to defence, in 1911 to join the newly formed Pacific Coast Hockey Association (PCHA). He spent the following decade playing with the New Westminster Royals, Portland Rosebuds and Victoria Aristocrats where he was named a PCHA first-team all-star eight times and played in the 1916 Stanley Cup Finals with Portland. He later played minor professional Hockey in California, Minnesota and Oregon before retiring at the age of 45. Johnson was known for using perhaps the longest stick in the game's history, giving him a 99 inch reach.

He was inducted into the Hockey Hall of Fame in 1952.

When Lester and Frank Patrick formed the Pacific Coast Hockey Association (PCHA) in 1911, they sought to lure the NHA's top stars out west. Johnson, by then considered one of the game's best players, was among the players who jumped at the higher salaries the Patricks were offering. Johnson was placed on the New Westminster Royals, and switched positions from left wing to cover-point (defence). He remained a star on offence, scoring nine goals in 14 games, and was named to the PCHA's first all-star team, as New Westminster won the inaugural PCHA championship. Prior to the 1912–13 season, and despite being branded an "outlaw" by the NHA, Johnson appeared ready to return to the Wanderers as he signed a new contract with the eastern team. However, he previously signed a contract with the Royals,[10] and ultimately chose to remain with New Westminster.
Johnson was again named to the all-star team that season, then played a third year in New Westminster in 1913–14 though he missed a month of the season after suffering a deep laceration on his leg during a game. Following the season, he moved to Portland, Oregon when the Royals transferred south to become the Portland Rosebuds. He again made the all-star team in 1915, the first of five consecutive seasons in which he did so. Johnson again faced contract issues prior to the 1915–16 NHA season when he refused to sign Portland's offer, demanding better terms. He eventually signed with Portland, and was reported to have turned down lucrative offers to return to the NHA.
The Rosebuds won the PCHA championship that season, and in doing so became the first American team to compete for the Stanley Cup. For Johnson, it marked his first in a Stanley Cup final in six years, and was not without controversy. The Rosebuds faced the NHA's Montreal Canadiens, and the entire series was played in Montreal. As a consequence of his jumping to the PCHA in 1911, Montreal Wanderers owner Sam Lichtenhein had won a judgement against Johnson for $2,000 for breach of contract, but it was not enforceable unless he returned to the jurisdiction of Quebec's courts. When it became known that Lichtenhein would gain Johnson's salary for playing in the series, Johnson contemplated refusing to play. He decided to play in the series anyway, and scored one goal in the five game series. The Canadiens won the best-of-five series 3–2.
Lester Patrick, managing the Spokane Canaries, thought he had an agreement to secure Johnson's playing rights for the 1916–17 season. Portland had come to verbal agreement with Patrick that they would do so if he would relinquish claims on four players Portland sought to sign. When it was determined that some of those players would not report to Portland, the Rosebuds refused to relinquish Johnson, leading Patrick to claim he had been "double crossed". Remaining with the Rosebuds, Johnson posted a career high 21 points in 1916–17
When the Rosebuds relocated to Victoria, British Columbia to become the Victoria Aristocrats, Johnson moved north with the team. His offence had declined since 1917, as he scored only five, six and five points in the following three seasons, and no goals in that third season of 1919–20.He improved to five goals and seven points in 1920–21, and was named a first-team all-star for the eighth time. However, when his play was met with jeers from the home fans in the 1921–22 season, Johnson felt it was time to retire.
Johnson returned to hockey in 1925 when he played a season in the California Professional League before spending the winter of 1926–27 with the Minneapolis Millers of the American Hockey Association. He again returned to the game in 1928–29 with the Portland Buckaroos of the Pacific Coast Hockey League, then played two seasons in the California Hockey League between 1929 and 1931 with the Hollywood Millionaires and then the San Francisco Tigers before retiring for good at the age of 45.