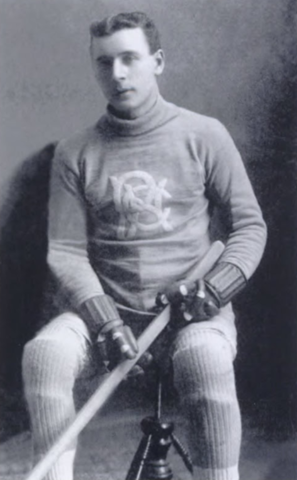 Gardner's playing career started in Boon's Lane with childhood buddy Dickie Boon, where they both honed their Hockey skills on the streets and backyard rinks in Montreal.

After one season with the Wanderers, Gardner then turned professional, playing with the International Hockey League / IHL Calumet Miners from 1904 to 1906, scoring 19 goals in 42 games. Gardner then Joined the IHL Pittsburgh Pros for the 1906-07 season, scoring 10 goals, 8 assists in 20 games.

Gardner returned to Canada in 1907 and played for the Eastern Canada Amateur Hockey Association / ECAHA Montreal Shamrocks for one season, before Boon convinced Gardner to rejoin the Wanderers, and he would then play for the club until 1911, winning the Stanley Cup championship in December, 1908 and March, 1910.

On November 25, 1909, J. Ambrose O'Brien, Boon and Gardner decided to form their own league, the National Hockey Association / NHA after they were rejected in their applications to join the Canadian Hockey Association / CHA, and to capture francophone interest in Montreal, O'Brien and Gardner conceived of creating a team consisting of francophone players, to be managed by francophones. Gardner suggested the name 'Les Canadiens', known today as the Montreal Canadiens, and the team was admitted on December 4, 1909 to be managed by Jack Laviolette, but owned by O'Brien. Gardner played for the Wanderers in the new league.

Gardner joined the new Pacific Coast Hockey Association / PCHA and was a player/manager for the New Westminster Royals from 1911 to 1913, helping the team win the Patterson Cup as PCHA champions in 1912.

Gardner returned to Montreal in the summer of 1913, and became the coach and a player of the Montreal Canadiens for two seasons before retiring as a player in 1914 after 2 games played to focus on coaching. With the Canadiens, Gardner acted simultaneously as the team’s coach and captain. Thanks to a total of 13 wins and 26 points in his first season, Gardner led the Canadiens into the playoffs for the first time in team history. Gardner maintained a record of 19 wins and 21 losses behind the Canadiens’ bench during his two seasons as coach.

Gardner later coached the Hamilton Tigers in 1924-25, and teams in the Western Canada Hockey League and Quebec Hockey League.

Jimmy Gardner was inducted into the Hockey Hall of Fame in 1963.