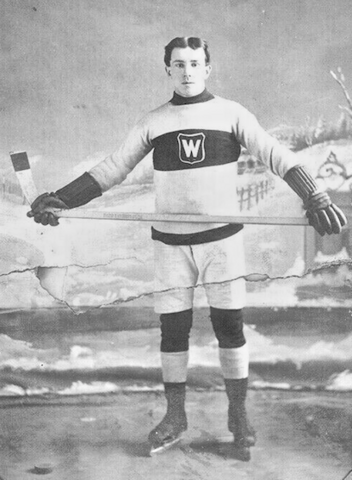 Hyland played his early Hockey with the Montreal Gaelics, St. Ann's, and then Montreal Shamrocks.

Hyland turned professional with the Shamrocks for the 1908-09 Eastern Canada Hockey Association / ECHA season. A fast skater with a powerful shot, he scored two goals in his professional debut on January 2, 1909 against the Quebec Bulldogs in a 9-8 Shamrocks win. Hyland finished the season with 18 goals in 11 games and 6th in league scoring

Hyland then joined the Montreal Wanderers for 1910 NHA season, scoring 20 goals in 11 games (tied for 5th in NHA).
The Wanderers finished in 1st place for the inaugural NHA season, losing just once in a 12 game season, winning the 1st O'Brien Trophy as NHA champions, and in March took possession of the Stanley Cup from Ottawa Senators as NHA champions.

After the season, the NHA arranged an 'international championship' at New York City's St. Nicholas Rink. Like the previous spring, Ottawa and Wanderers played a two-game series in New York on March 15 & 16, 1910 for a purse of $1,500. Wanderers won both games 4–3. The Renfrew Millionaires also travelled to New York and defeated the Wanderers in a single game for $1,000 on March 19, 1910.

Hyland had another strong season for the Wanderers in 1910-11 with 14 goals in 15 games, but was then lured West, by the offer to play Hockey and lacrosse in New Westminster, British Columbia. He joined the New Westminster Royals of the Pacific Coast Hockey Association / PCHA for the inaugural PCHA season in 1911-12, scoring 26 goals in 15 games. Newsy Lalonde scored 27 goals as league leader.

Hyland was named to the PCHA First All-Star team and New Westminster won the inaugural Paterson Cup as 1st champions of the PCHA in 1912. It would be the only league championship the Royals would earn.

Many of the early stars of ice Hockey also played field lacrosse, and Hyland was a fine lacrosse player too, originally playing as a one of three home fielders position. Hyland first played for New Westminster Salmonbellies on June 22, 1912 in a 5-1 win vs Vancouver Lacrosse Club. He played just a few games at seasons start in the first home position, but late in the season began playing regular at the inside home position, helping the Salmonbellies win the 1912 Minto Cup championship vs Cornwall Lacrosse Club.

Hyland returned to the Wanderers for the 1912-13 NHA season and scored eight goals in a single game on January 27, 1913 in a 10-6 Montreal victory over Quebec Bulldogs. He remained with the Wanderers until the team was dissolved in January 1918 when a fire destroyed the Westmount Arena where they played.

The NHA became the National Hockey League / NHL for the 1917-18 season, and Hyland, still playing for the Wanderers, scored the 1st Hat Trick in NHL history on opening night of the National Hockey League December 19, 1917. He scored 3 goals on Sammy Hebert of the Toronto Arenas in the 1st period (6:05, 10:20, 16:35). Toronto replaced Hebert with Art Brooks for the 2nd & 3rd periods, with Hyland scoring 2 more goals in the 2nd period. He later took a puck to the eye on a deflection shot, and was knocked out cold. The Wanderers won the game 10-9. This would be the Wanderers' only win in the NHL.
Hyland played 2 nights later vs the Canadiens.

Hyland finished his playing career as a member of the Ottawa Senators after being claimed in the NHL Dispersal Draft of Wanderers players after their arena burned down.. Hyland was named playing coach. He retired the following year.

During his playing days, Hyland was coach of the Loyola College Hockey Team, winning the junior championship of Canada in 1913. After he retired from playing, Hyland became the head coach at McGill University (1918-1919) and then went on to coach in the Quebec Amateur Hockey Association and the Quebec Senior Hockey League.