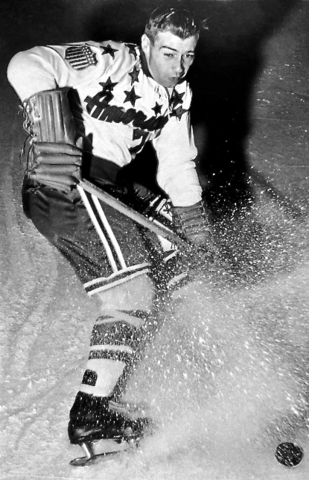 Fielder moved to Nipawin, Saskatchewan with his Canadian parents at an early age, learning to play his Hockey there. He later played his first junior Hockey with the Prince Albert Mintos of the Saskatchewan Junior Hockey League / SJHL in the 1947-48 season, and spent two years there before moving out to Alberta to play for the Lethbridge Native Sons in the Western Canada Junior Hockey League / WCJHL. In 1949-50, he was the WCJHL’s Most Valuable Player (Ed Bruchet Trophy). His scoring and play making helped him reach back to back 100 point seasons (105 & 101) while in Lethbridge.

After his final season playing for the Native Sons, Fielder signed a deal with the Chicago Black Hawks, and had his NHL debut on March 11, 1951 vs the Detroit Red Wings. He played 3 NHL games that March, going pointless.

Fielder played the 1951-52 season with the New Westminster Royals of the Pacific Coast Hockey League / PCHL, scoring 25 goals, 50 assists during the season, and was named the Rookie of the Year.

In September 1952, the Black Hawks traded Fielder to the Detroit Red Wings, and he spent the entire regular season in the American Hockey League / AHL, playing for the St. Louis Flyers. He scored 22 goals, 61 assists, winning the Dudley "Red" Garrett Memorial Award as AHL Rookie of the Year. He was also called up to play 4 playoff games for the Red Wings, going pointless.

Detroit traded Fielder to the Boston Bruins in September 1953, and they sent him to the WHL, playing most of the season with the Seattle Bombers, where he scored 24 goals, 64 assists, winning the WHL Leading Scorer Award. Boston called him up for 2 playoff games, where he went pointless.

Fielded played the 1954-55 season with the WHL New Westminster Royals, before heading back to Seattle, where over the next 14 years, would play for the Seattle Americans and Seattle Totems, becoming a WHL legend.

Fielder was traded back to the NHL Red Wings in 1957, and as he put it - “I started the 1957-58 season with the Detroit Red Wings but had the misfortune to be on a line with Gordie Howe,” Fielder says. “We were both puck carriers and there was room for only one on a line. I spent a lot of time on the bench and eventually asked them to send me back to Seattle. It wasn’t about money. I just wanted to play.”

After playing in Seattle, Fielder played 3 seasons with the WHL Salt Lake Golden Eagles, and finished his Hockey career with the Portland Buckaroos, retiring in 1973.

On December 20, 1972, Fielder became the first professional Hockey player to record 2,037 points. Today he is fourth on the list of all-time North American professional scoring leaders behind only Wayne Gretzky, Gordie Howe and Mark Messier.

Guyle Fielder was inducted into the Seattle Hockey Hall of Fame in 1981.

Guyle Fielder was inducted into the State of Washington Sports Hall of Fame in 2008.

Guyle Fielder was inducted into the Saskatchewan Hockey Hall of Fame in 2015.

Guyle Fielder was inducted into the Saskatchewan Sports Hall of Fame in 2017.

Fielder also had a street named after him in Nipawin in 2015.

NOTE - There will be a annual award dedicated in Fielder's name to be given annually within the city’s future NHL team for sportsmanship and leadership.