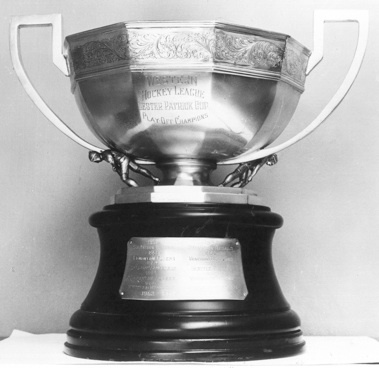 The Lester Patrick Cup was retired following the demise of the WHL, and is on display at the Hockey Hall of Fame in Toronto.

The Pacific Coast Hockey League was an ice Hockey minor league with teams in the western United States and western Canada that existed in several incarnations: from 1928 to 1931, from 1936 to 1941, and from 1944 to 1952.

The final incarnation of the league was managed by Hockey Hall of Fame member Al Leader, and grew out of combining teams from the Southern California Hockey League and the Northwest International Hockey League. The PCHL was founded as an amateur loop, partly because the National Hockey League recognized Pacific Coast Hockey Association (PCHA) founder Lester Patrick as the territorial rights holder for professional Hockey in Vancouver, Portland and Seattle. In 1948, however, the ten team league voted to turn pro, and was recognized as such by the NHL.

The PCHL championship trophy was the President's Cup.

The championship trophy of the WHL was the Lester Patrick Cup.