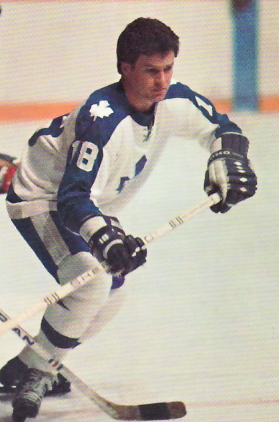 McKenny played with the Neil McNeil Maroons of the Metro Junior A league in 1962–63. When the league folded in 1963, McKenny transferred to the Ontario Hockey Association's Toronto Marlboros, playing there for 3 seasons. In his first year as a Marlboro, McKenny had a strong Memorial Cup playoff run, scoring 1 goal, 7 assists in 12 games, as the Toronto Marlboros won the 1964 Memorial Cup championship.

In his third and final year of junior Hockey with the Marlboros in 1965-66, McKenny was called up to the NHL, and played 2 games for the Toronto Maple Leafs.

Drafted by the Toronto Maple Leafs in the third round of the 1963 NHL Amateur Draft (17th overall), McKenny had difficulty staying in the NHL early in his career and often played forward instead of his usual position on defense. He was given two other opportunities to make the Maple Leafs teams in the 1966–67 and 1967-1968 seasons but only played a total of eleven games. However, on Feb. 24, 1968, he did score the game-winning goal in a 1-0 win over Boston which was the second goal of his NHL career.

McKenny was not promoted to stay on the Maple Leafs for several years, attributed to a poor attitude, possibly his alcoholism and his antipathy towards the high-pressure style of coach and GM Punch Imlach. He played in the minor leagues for the Tulsa Oilers / CPHL, the Rochester Americans / AHL, and the Vancouver Canucks / WHL. McKenny and Don Cherry were roommates when on the road with the Rochester Americans. McKenny and Cherry also helped the Vancouver Canucks win the 1969 Lester Patrick Cup as Western Hockey League champions. McKenny had 5 goals, 5 assists in 8 games on route to the championship.

McKenny finally became a full-time member of the Toronto Maple Leafs team during the 1969–70 season and became one of the Maple Leafs top defensemen for eight seasons. McKenny has the fifth highest points total for Leafs defencemen, accumulating 327 points (81 goals, 246 assists) in 594 games, behind only Börje Salming, Tomas Kaberle, Tim Horton, and Ian Turnbull. In 1974, McKenny played in the NHL All-Star Game.

In 1971, McKenny also appeared in the movie "Face-Off" as the skating stand-in for Art Hindle.

Near the end of his career, McKenny was sent down to the Central Hockey League's Dallas Black Hawks for the 1977–78 season. Despite the demotion, he was named to the CHL's Second All-Star Team. On May 15, 1978, McKenny was traded to the Minnesota North Stars for cash and future considerations (the rights to Owen Lloyd), playing in only ten games before retiring from the NHL.

In 1979-80 McKenny coached in Switzerland and France, but returned to Toronto in the end and entered the broadcasting industry selling advertising, and later as a colour commentator for Italian-Canadian Hockey games on a local cable station. Then McKenny joined Citytv as a sports reporter and later a sports anchorman on the dinner-hour broadcasts, and is still one of the most familiar faces on Toronto television.