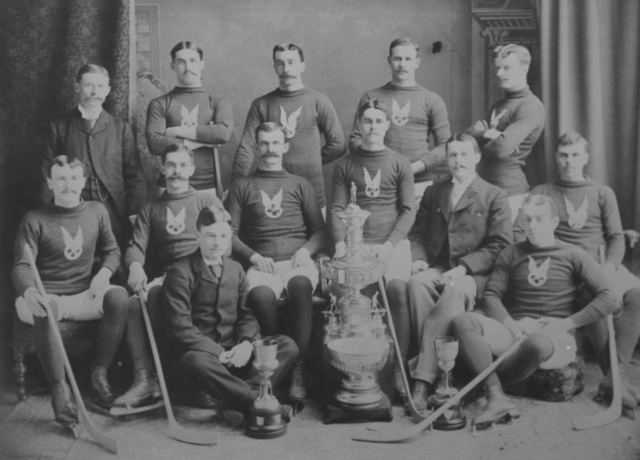 The Montreal Hockey Club also displays the 1885 and 1887 Montreal Winter Carnival trophies that they won.

The 1st Stanley Cup playoff game occurred on March 17, 1894. At the end of the 1894 AHAC season, four teams tied for the AHA championship with records of 5–3–0. This created problems for the AHA governors and the Cup's trustees since there was no tie-breaking system in place. After long negotiation and the withdrawal of Quebec from the championship situation, it was decided that a three-team tournament would take place in Montreal, with Ottawa getting a bye to the finals (being the sole "road" team). The Montreal HC defeated the Montreal Victorias, 3 – 2. Five days later on March 22, 1894, Montreal successfully defended their title with a 3 – 1 win over Ottawa.

Billy Barlow is credited with scoring the 1st Stanley Cup-winning goal in history in the final playoff match of 1894.