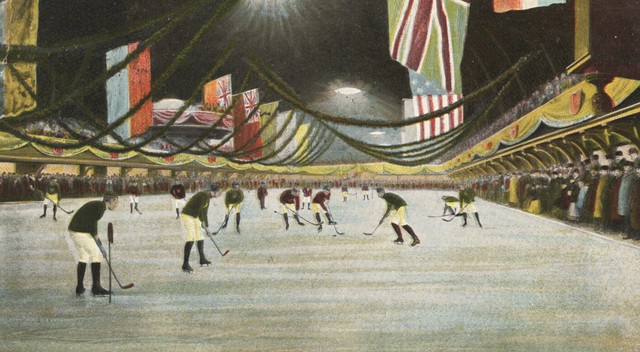 The Victoria Skating Rink was an indoor ice skating rink located in Montreal, Quebec, Canada. Opened on December 24, 1862, it was described at the start of the twentieth century to be "one of the finest covered rinks in the world".

It was the first of numerous ice rinks in Canada to be named after Queen Victoria.

The building was used during winter seasons for pleasure skating, ice Hockey and skating sports on a natural ice rink. In summer months, the building was used for various events, including musical performances and horticultural shows. It was the first building in Canada to be electrified.

The rink may be most famous for its connection to ice Hockey history. It holds the distinction of having hosted the first-ever recorded organized indoor ice Hockey match on March 3, 1875, between members of the Victoria Skating Club, organized by James Creighton, a member of the Victoria Skating Club and a figure skating judge. The match lays claim to this distinction because of several factors which establish its link to modern ice hockey: it featured two teams (nine players per side), goaltenders, a referee, a puck, a pre-determined set of rules, including a pre-determined length of time (60 minutes) with a recorded score. Games prior to this had mostly been outdoors, with sticks and balls, with informal rules and informal team sizes. In order to limit injuries to spectators and damage to glass windows, the game was played with a wooden puck instead of a lacrosse ball, possibly the first time such an object was used. The two teams, members of the Club, included a number of McGill University students. Sticks and skates for this game were imported from Nova Scotia, including Mic-mac sticks and Starr skates. This first game was pre-announced to the general public in the pages of the Montreal Gazette newspaper.

From 1875 until 1881, Hockey matches would be held between Hockey-playing members of the Skating Club and outside teams, such as McGill University and the Montreal Hockey Club. In 1881, the Victoria Hockey Club was organized and made the Rink its home. Play at first was by exhibition only as there were no leagues. The Rink was used for exhibition games or as an indoor facility if the outdoor rink was not available during the annual Winter Carnivals. It was for the 1883 Carnival that Hockey team sizes were reduced further, to seven per side, which was the common size for the next thirty years. Eventually the tournament play led to plans for a league. The Rink hosted the founding meeting of the Amateur Hockey Association of Canada (AHAC) league in December 1886. The AHAC was the second organized ice Hockey league in Canada, and the first championship league.

Governor General of Canada Frederick Arthur Stanley / Lord Stanley, later to donate the Stanley Cup trophy, witnessed his first ice Hockey game at the Victoria Rink on February 4, 1889, seeing the Victorias defeat the Montreal Hockey Club 2–1. According to The Globe, "the vice-regal party was immensely delighted with it." The Rink would later host the first Stanley Cup playoffs in 1894. By that time, the building had gained an elevated balcony for additional spectators and a projecting loge, precursor of today's luxury boxes. In 1896, the rink was connected by telegraph to distribute the Montreal-Winnipeg Stanley Cup series score immediately. This is considered the first ice Hockey broadcast by wire

The rink was also notable for its role in the development of figure skating in Canada. It held some of the first competitions in the sport in Canada. During its existence, it was the home of two important clubs, the Victoria Skating Club and the Earl Grey Skating Club.

Victoria Rink was the home rink of Louis Rubenstein, Canadian and world figure skating champion. Rubenstein, considered one of the first world champions of the sport, and also an important organizer. Rubenstein first won the Montreal Championship in 1878, and won his first Canadian championship at the Victoria Rink in 1883. At the time, the Victoria Skating Club was considered "the most important one in the Dominion, if not on the continent." In 1887, the Club arranged for the formation of the Amateur Skating Association of Canada, the first national governing body of skating in Canada.

The Victoria Skating Club was incorporated on June 9, 1862, with a sizable capitalization of $12,000, for the purpose of buying the land and building the rink. Designed by Lawford & Nelson, Architects, the building was a long (252 feet (77 m) x 113 feet (34 m)) wide, two-story brick edifice with a 52 feet (16 m)-high pitched roof supported from within by curving wooden trusses, which arched over the entire width of the structure. Tall, round-arched windows punctuated its length and illuminated its interior, while evening skating was made possible by 500 gas-jet lighting fixtures set in coloured glass globes. At a later date, the lighting was converted to electric, making the building the first in Canada to be electrified.

The ice surface measured 204 feet (62 m) by 80 feet (24 m), dimensions very similar to today's National Hockey League (NHL) ice rinks. It was surrounded by a 10 feet (3.0 m)-wide platform, or promenade, which was elevated approximately 1 foot (30 cm) above the ice surface and upon which spectators could stand or skaters could rest. Later, a gallery was added with a royal box for visiting dignitaries. The ice itself was a 'natural' ice surface, frozen by the coldness of the season, not by the later invention of mechanically-frozen ice.

By 1906, the building needed repairs and rather than spend money on rebuilding the Rink, the Victoria Skating Club sold the site to J. William Shaw, a piano merchant, who planned to build a concert hall on the site. Shaw planned to rebuild the structure into an auditorium of 2,000 to 2,500 capacity, suitable for orchestra or opera concerts. Shaw deferred his plans due to the high cost of construction and a low expectation of profits. He continued the use of the building for skating and Hockey matches, introducing a summer use for car parking.

Smaller Hockey leagues continued to use the Rink, such as the Commercial and Steamship League, the Inter-School Hockey League and the Manufacturers' League. McGill University also occasionally used the rink. The final game of any note reported by the Montreal Gazette was a semi-final of the Canadian National Railway Hockey League (CNR) between Car Department and General Office on March 3, 1925, exactly fifty years after the first game. The playoff final game of the CNR league was not held at the Victoria; it was held at the Forum which had opened that season. The CNR game drew 1,200 spectators.

During the summer months, dog shows, vaudeville performances, the horticultural show and various trade exhibitions continued at the Rink. By the 1920s, the building had deteriorated and the gallery became unsafe to use. Shaw sold the site in 1925 for $250,000 to the Stanley Realty Corporation to build a parking garage. The Victoria closed and a parking garage was built in its place.

In 2002, the International Ice Hockey Federation (IIHF) announced that it would acknowledge the site of the Rink with "a commemorative plaque or other historical site marker to remind the passers-by of the existence of the Victoria Skating Rink, the birthplace of organized Hockey."