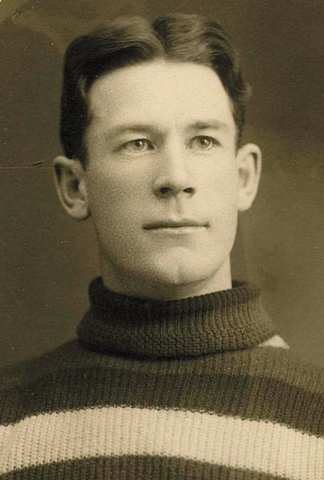 Born in Rat Portage, Ontario, he was a young child when he first learned to play hockey, and when old enough he joined the junior Rat Portage Thistles, a team of players aged 12 to 16. Regarded as one of the best players in northwestern Ontario, Phillips moved east to Montreal in 1902 to attend McGill University, where he joined the school's hockey team and was named captain. The following year he joined the Montreal HC of the Canadian Amateur Hockey League, where he finished third on the team in scoring with six goals in four games. Phillips was also with the team when they played the Winnipeg Victorias in a Stanley Cup challenge series; he scored three goals in the four game series, which saw Montreal retain the Cup until the end of the season. Later that year he moved to Toronto to attend the Central Business School. He played for the Toronto Marlboros and was regarded as the team's best player after he changed from his usual position of left wing to play rover. The Marlboros won both the Toronto city and the Ontario Hockey Association senior championships, and were invited to play a Stanley Cup challenge series against the Ottawa Hockey Club. The Marlboros lost the series, though Phillips had the most assists and penalty minutes, with eight and fifteen, respectively.

Phillips moved back to Rat Portage in 1904 when he learned his father was dying. Offered a job with a lumber company, and a $1,000 bonus to play Hockey for the Thistles, he stayed in the city, much to the disappointment of the Marlboros, who had wanted him to stay in Toronto. Rat Portage changed its name to Kenora in 1905. Due to their proximity to Manitoba, the Thistles played in the Manitoba Hockey League. In the 1904–05 season Phillips had the second most goals on the team and league, with twenty-six, two behind Billy McGimsie. The Thistles won the Manitoba league championship, which allowed them to challenge for the Stanley Cup. By this time Phillips was regarded as one of the best players in Canada, compared to Frank McGee of the Senators. The Montreal Herald reported that "nine of out ten people will reply that either Frank McGee or Tom Phillips is" the best player in the country.

In the first game against Ottawa, Phillips scored the first two goals, then added another three goals in the second half of the game as the Thistles won by a score of 9–3. Ottawa won the second game, 4–2, while Phillips was held pointless. In the third and deciding game of the series Phillips scored the first goal of the game, along with a further two goals, though Ottawa won the game 5–4 to win the Cup. The following season the Thistles won the Stirling Cup as champions of western Canada, which allowed them the right to challenge for the Cup again. However there was an early spring that year, and with natural ice used at the time, the series had to wait until the following winter. In the 1907 season, he led the league in both goals and points, with eighteen. In the Kenora Thistles Stanley Cup challenge against the Montreal Wanderers in January, 1907, he scored all four goals in the Thistles 4–2 victory. His nine goals, nine points and sixteen penalty minutes were all leaders in those categories.

Prior to the start of the 1907–08 season, he was offered $1,500–$1,800 to play for the Wanderers, but instead signed with the Ottawa Senators for a salary of $1,500 for the season, partially paid for by Ottawa sportsmen. Phillips explained that he was ready to sign with the Wanderers, but the contract he received did not include everything promised. He finished the season with twenty-six goals, two goals behind the scoring leaders, teammate Marty Walsh and Russell Bowie of the Victorias. Though offered a high salary to stay in Ottawa, Phillips decided to leave the team, and prior to the 1909 Hockey season played with the Edmonton Professionals of the AAHA. The Edmonton Hockey team had signed several high profile players from Eastern Canada to play for the team in the Stanley Cup challenge, including Lester Patrick and Didier Pitre; only two players on the team were from Edmonton, the rest came from the east. Both Patrick and Phillips never even reached Edmonton; they met their team in Winnipeg on its way east for the Stanley Cup challenge. Phillips played in the first game against the Montreal Wanderers, which Edmonton lost 7–3, but broke his ankle in the game and was forced to miss the second game, a 7–3 victory for his club. His ankle injury kept him out of the following season. He continued further west, playing for the Nelson Hockey Club in 1909–10 and when Lester and Frank Patrick created the Pacific Coast Hockey Association (PCHA) in 1911, Phillips joined one of the teams in the new league, the Vancouver Millionaires; he finished the 1911–12 season fourth on Vancouver in goals, with 17 in 14 games. However his skills had diminished in recent years, so he retired at the end of the season.

Thomas Neil Phillips was one of the original nine inductees of the Hockey Hall of Fame when founded in 1945.