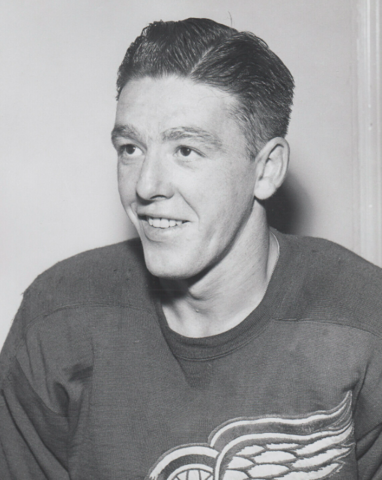 Pronovost was discovered by Detroit Red Wings scout Marcel Côté at a Quebec Hockey Tournament, and signed to a protected list.

The Red Wings placed 17 year old Pronovost with the Windsor Spitfires, one of their junior teams in the Ontario Hockey Association / OHA, for the 1947–48 season. He played 2 seasons for the Spitfires, and also played for the Detroit Auto Club team in the International Hockey League / IHL. At the time an amateur league, the IHL based most of its teams in Detroit or Windsor and the majority of players were affiliated with the Red Wings. Playing in the two leagues prepared Pronovost for the rigors of an NHL schedule. He played 52 games that first season, and 51 in 1948–49. Pronovost permanently moved to defence during his tenure with the Spitfires.

The Red Wings then assigned Pronovost to the Omaha Knights of the United States Hockey League / USHL to start his professional career. He appeared in 69 games for the Knights and scored 13 goals and 52 points. Pronovost set a scoring record by a defenceman and was named the USHL's rookie of the year. He was also named to the First All-Star Team.

The Red Wings brought Pronovost to Detroit at the conclusion of his USHL season. Gordie Howe had suffered a serious injury early in Detroit's 1950 Stanley Cup Playoff series against the Toronto Maple Leafs forcing the team to move Red Kelly to forward and insert Pronovost into the lineup at defence. He made his NHL debut on April 6, 1950, in the fifth game of the series. Pronovost appeared in nine playoff games as Detroit eliminated the Maple Leafs then came back from a 3–2 series deficit in the final and defeated the New York Rangers in the final two games of the series to win the 1950 Stanley Cup championship.

The 1950 NHL All-Star Game was played prior to the start of the 1950–51 season and Pronovost played in the contest, a 7–1 victory by Detroit vs the NHL All-Stars. It was the first of 11 All-Star Games which he would ultimately play.

Pronovost suffered a broken cheekbone and a cracked bone in his ankle in separate incidents during the pre-season which affected his playing, and by December 1951, the Red Wings sent Pronovost to their American Hockey League / AHL affiliate, the Indianapolis Capitals. Pronovost scored 32 points in 34 games with Indianapolis before the Red Wings recalled him back to the NHL. Though he played only a half season with the Capitals, he was named an AHL Second Team All-Star on defence. He finished with seven points in 37 games with Detroit and scored his first NHL goal on February 19, 1951, on goaltender Jack Gelineau. It was a last-minute goal that salvaged a 2–2 tie against the Boston Bruins.

The Red Wings again won the Stanley Cup in 1952, defeating the Montreal Canadiens in the final. It was Pronovost's first full season in the NHL; he appeared in 69 regular season games and eight more in the playoffs. The Red Wings set a record that post-season by winning all eight games played – four by shutout – and the series spawned the Legend of the Octopus. When an octopus was thrown onto the ice near the end of the clinching game (the eight tentacles meant to represent the eight wins required to win the Stanley Cup at that time), Pronovost was the only player willing to pick it up and remove it. He won his third and fourth Stanley Cup championships in 1954 and 1955 and played his second and third All-Star Games after each victory. Pronovost's 34 points in the 1954–55 season were the most of his NHL career. He also played in an ill-fated game in Montreal on March 17, 1955, in which fan anger over the NHL's suspension of Maurice Richard precipitated the Richard Riot. Awarded a forfeit victory in that game, Pronovost and the Red Wings won their final game of the season, also against Montreal, to clinch top spot in the NHL standings for a record seventh consecutive season.

By the 1956–57 season, Pronovost had gained recognition as being one of the NHL's top defencemen. The Red Wings named him an alternate captain of the team, a position he held until 1965. He was named to represent the NHL All-Stars at the 1957 All-Star Game, the first of five consecutive appearances, and was named to the post-season Second All-Star Team in both 1958 and 1959. Pronovost scored a career high 11 goals in 1958–59 and was named to the First All-Star Team in both 1959–60 and 1960–61. The Canadiens even fêted him by holding "Marcel Pronovost Night" on March 5, 1960, in which he received gifts and was cheered by the opposing Montreal crowd. It was reported as being the first time in NHL history that a team honoured an opposing player.

The Red Wings reached, and lost, the Stanley Cup Finals to Chicago in 1961. Pronovost suffered a broken bone in his ankle that caused him to miss two games of the series and play the remainder in significant pain. Detroit also lost in the 1963 and 1964 finals, which marked eight appearances in the final for Pronovost. He is also one of four players in NHL history to play in four game 7's in a Stanley Cup Final.

The Red Wings traded Provonost to the Toronto Maple Leafs on May 20, 1965, along with Aut Erickson, Larry Jeffrey, Eddie Joyal and Lowell MacDonald in exchange for Andy Bathgate, Billy Harris and Gary Jarrett. Pronovost, who heard about the trade on the radio before being contacted by either team, was shocked at being dealt away from an organization he played with for 18 years. He adjusted quickly and reached a career milestone early in the 1965–66 season. Pronovost became the seventh player in NHL history to play 1,000 regular season games in a November 28, 1965, contest against the Rangers. He also missed 16 games after suffering strained knee ligaments after colliding with Earl Ingarfield. It was the first of several knee problems that would affect the remainder of Pronovost's career; he also missed games early in the 1966–67 season due to strained knee ligaments.

The 1966–67 Maple Leafs had the oldest roster in the NHL and became known as the "Over the Hill Gang". The team lost ten games in a row at one point, but qualified for the 1967 Stanley Cup playoffs in third place. The Maple Leafs were considered underdogs against both the Chicago Black Hawks in the semi-final and the Canadiens in the final. Sports Illustrated writer Pete Axthelm called Pronovost the best defenceman of the finals; he and defensive partner Larry Hillman were on the ice for only one goal against at even strength during the entire post-season. Pronovost also scored a key shorthanded goal in a 4–1 win in the fifth game of the series, and Toronto clinched the Stanley Cup with a 3–1 win at home in game six. It was also his 134th, and ultimately final, playoff game. At the time, only Red Kelly (164) and Gordie Howe (150) had appeared in more.

Pronovost appeared in 70 games for the Maple Leafs in 1967–68 and recorded 20 points, but he was held to only 34 games the following season. He missed the majority of the season to injury, and it was at that time that Maple Leafs president Conn Stafford Smythe suggested Pronovost should be installed as a player-coach of one of Toronto's minor league affiliates. He was offered a position with the Tulsa Oilers of the Central Hockey League / CHL, and though initially reluctant to go, the Oilers organization was able to convince Pronovost and his wife to move to the Oklahoma city. He played and coached for much of the year in Tulsa, but was briefly recalled back to Toronto part way through the 1969–70 NHL season. He recorded one assist in seven games with Toronto, the last of his NHL career.

Supported by Tulsa's general manager Ray Miron, who helped him behind the bench, Pronovost appeared in 53 games for the Oilers in 1969–70 and coached the team to a 35–27–10 record. He ended his playing career after appearing in 17 games for Tulsa in 1970–71, and coached two additional seasons for the Oilers before taking his first major league job. The Chicago Cougars of the newly founded World Hockey Association / WHA announced Pronovost had signed a two-year contract to become the franchise's first head coach on July 6, 1972. He lasted only one season in Chicago before being fired as the Cougars posted a 26–50–2 record in 1972–73.

Pronovost returned to coaching in 1975 as he was hired mid-season to take over the Hull Festivals of the Quebec Major Junior Hockey League / QMJHL. He remained with Hull, who were renamed the Olympiques, for two seasons before he was hired to coach the Buffalo Sabres for the 1977–78 NHL season. Pronovost was reluctant to take the job, and did so only following the encouragement of Hull general manager Norm Baril.

Among the highlights for Pronovost and the Sabres in his first season was Buffalo's first regular season victory in franchise history against the Philadelphia Flyers in Philadelphia, on November 10, 1977. Buffalo had 15 losses and two ties in its previous 17 visits (not counting the 1975 Stanley Cup Finals, in which the Sabres won two and lost four). The Sabres finished with a 44–17–19 record and finished second in the Adams Division. They defeated the Rangers in the first round of the playoffs before being eliminated by Philadelphia. However, after the Sabres recorded only eight wins in their first 24 games in 1978–79, the organization fired Pronovost along with general manager Punch Imlach. Pronovost returned to Hull almost immediately, but left the team again in 1979 to become an assistant to head coach Bobby Kromm in Detroit. When Kromm was fired late in the 1979–80 season, general manager Ted Lindsay and Pronovost took over as the team's coaches. Lindsay was the official coach of the team for the final nine games of the season, but Pronovost worked behind the bench as the Red Wings won only two contests and lost seven. Pronovost remained with Detroit as Lindsay's assistant to begin the 1980–81 season, but both were dismissed after Detroit began with a 3–14–3 record.

Returning again to junior Hockey, Pronovost was hired as the coach of the Ontario Hockey League's Windsor Spitfires. The team went 22–44–4 in 1981–82, while Pronovost described the following season as being a "disaster". He was given a ten-game suspension for verbally harassing the officials and continuing to coach from the stands after being ejected from a game and was dismissed as Windsor's coach after the team won only two of its first 15 games. Pronovost's final season as a coach came in 1984–85 when he led the junior C Belle River Canadiens to the franchise's first league title and a Clarence Schmalz Cup win as Ontario provincial champions.

Pronovost turned to scouting in 1985 when he joined the NHL Central Scouting Bureau. He already had some experience with the role as one of his duties as coach in Tulsa included searching for talent to improve his team. Pronovost spent five years traveling across North America for the Scouting Bureau. In 1990, he joined the New Jersey Devils as one of the team's scouts. The 2013–14 NHL season was his 24th with the franchise, during which Pronovost has been a member of three Stanley Cup champions, in 1995, 2000 and 2003. New Jersey's goaltender for all three championships was Martin Brodeur, whom Pronovost helped convince the Devils to select with their first pick in the 1990 NHL Entry Draft.

2012 marked Pronovost's 65th year in professional Hockey, tying King Clancy for the longest such tenure by anyone in NHL history. His name has been inscribed on the Stanley Cup eight times; five as a player and three as a scout. The 53-year span between his first victory in 1950 and most recent in 2003 is a record for the trophy.

Pronovost published an autobiography in 2012 titled A Life in Hockey that documents his career in the sport.

Marcel Pronovost was inducted into the Hockey Hall of Fame in 1978.

Marcel Pronovost was inducted into the Windsor and Essex County Sports Hall of Fame in 1995.

Marcel Pronovost was inducted into the Michigan Sports Hall of Fame in 2012.