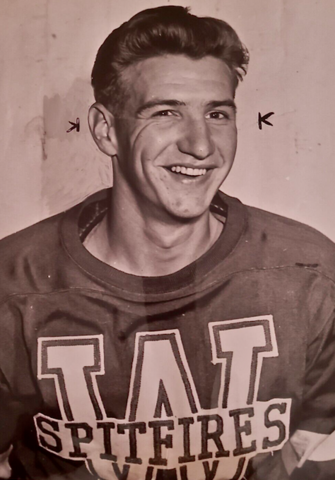 Skov played his junior Hockey for 3 teams between 1948 and 1950, first with the Windsor Spitfires (actually 3 times) of the OHA, then the Detroit Hettche and the Windsor Ryancretes, both of the IHL. In his final campaign with the Spitfires in 1949-50, he was a scoring machine with 51 goals and 51 assists in only 47 games.

Skov was property of the Detroit Red Wings, and they brought him up for 2 games, where he made his NHL debut on February 4, 1950 vs Toronto Maple Leafs at Maple Leaf Gardens in a 3-3 tie. He also played the next night vs New York Rangers.

Skov started his first season as a pro with the Omaha Knights of the United States Hockey League / USHL in 1950-51. There, he continued to score, putting up 26 goals, 33 assists in 45 games.
His ability to play a solid, physical game too, as he had 55 minutes in penalties. Detroit took notice, and Skov was back in the NHL in February. He scored his 1st NHL goal vs Harry Lumley of the Chicago Black Hawks on February 7, 1951 at 13:25 of the 3rd period at The Olympia in a 11-3 Detroit win. Skov had 2 goals, 1 assist in the game.

Skov finished the season in Detroit, and played his first NHL playoff games vs the Canadiens, which Montreal won in 6 games.

His role as a forward, however, underwent a change. In Detroit, the roster was already filled with top-line offensively oriented scorers. To secure his place farther down the ranks, Skov had to play as a two-way centre who made his top priority to neutralize the opposition's number-one centreman. Along with Marty Pavelich and Tony Leswick, he led a terrific trio that specialized in checking opposing scorers and contributed greatly to the rise of the Detroit Red Wings dynasty in the early 1950s. While his line was in charge of smothering the likes of Rocket Richard and Jean Beliveau.

After the third Stanley Cup, Skov was traded to the Chicago Black Hawks, who were last in the NHL, and with no direction or leadership.

Skov later quoted - "I think what we did eventually was instill a good attitude. Let's not be a last place team. Let's make ourselves contenders and work up the ladder."

In 1960, the Hawks traded him to the Montreal Canadiens who wanted him to coach one of their minor-league affiliates. Skov was open to offers but couldn't agree on a salary that satisfied his requirements, and played in only 3 games for the Canadiens. As a result, he retired after spending the bulk of the 1960-61 season with the Hull-Ottawa Canadiens of the EPHL.