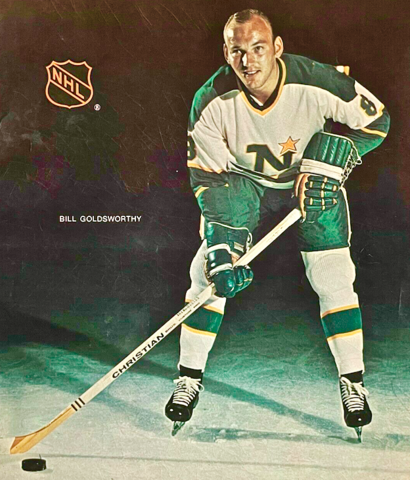 Goldsworthy made his NHL debut for the Boston Bruins on January 6, 1965 vs the New York Rangers at Madison Square Garden in a 5-2 Rangers win.

Goldsworthy scored his 1st NHL goal vs Roger Crozier of the Detroit Red Wings on December 12, 1965 at 9:22 of the 1st period in a 5-3 Red Wings win at Boston Garden.

Goldsworthy was drafted by the Minnesota North Stars from the Boston Bruins in the 1967 NHL expansion draft. He would play the bulk of his career for Minnesota.

Goldsworthy scored his 1st NHL hat trick vs Jean-Guy Talbot of the St. Louis Blues on November 8, 1969 in a 5-2 North Stars win at the Met Center.

His best offensive season was the 1973-74 season, when he set career highs in goals with 48 and points with 74.

The Minnesota fans were treated with the "Goldy Shuffle," a celebration Goldsworthy performed after each goal he scored at home.

Goldsworthy was named North Stars team captain in 1975, serving until he was traded to the New York Rangers in 1977.

Goldsworthy was selected to represent Canada at the historic 1972 Summit Series vs the Soviet Union. He had 1 goal and 1 assist in 3 games played.

Bill Goldsworthy died in 1996 of complications from AIDS, the first professional Hockey player publicly known to have the disease. He was diagnosed in November 1994, and told the St. Paul Pioneer Press in 1995 that his health problems stemmed from drinking and promiscuity.