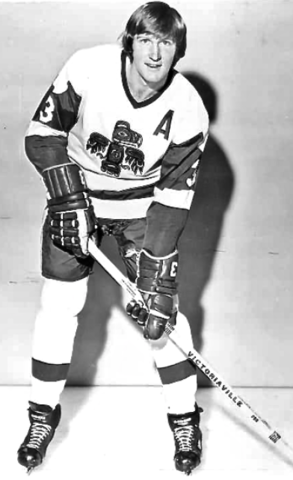 Dunn played college Hockey at the University of Saskatchewan from 1966 to 1970.

Dunn signed a free agent contract with the Vancouver Canucks on September 20, 1970, and then played with the AHL Rochester Americans for just over a season in 1970-71.

Early on in the '71-'72 season, Dunn moved on to the Seattle Totems of the WHL for the bulk of that season.

In his first full year of play with the Totems, Dunn took a major step forward, scoring 19 goals from the blue line and accumulating 75 points in just 63 games. He was named the WHL First All-Star Team and was awarded the 1973 Hal Laycoe Cup for the top defenseman in the league. The Canucks were convinced that Dunn was ready for the next level, and he became an NHL regular the following year.

Dunn finally made his NHL debut in 1973–74, establishing himself as a regular on the Canucks blueline as a rookie. He posted fine totals of 11 goals and 22 assists and 33 points in 68 games, good for 7th on the team in scoring. After a single game for Vancouver at the start of the 1974–75 campaign, Dunn was traded to the Toronto Maple Leafs for Garry Monahan and John Grisdale.

Dunn turned in another solid season for Toronto, finishing the year with 3 goals and 14 points in 73 games, along with 153 penalty minutes. In 1975–76, however, he lost his regular spot on the Maple Leafs blueline and was dispatched briefly back to the minors with the Oklahoma City Blazers, finishing the season with just 8 assists in 43 games.

With his NHL career at a standstill, Dunn jumped to the rival World Hockey Association for the 1976–77 campaign, signing with the Winnipeg Jets. Playing for a star-studded Jets team featuring the likes of Bobby Hull, Kent Nilsson, Ulf Nilsson and Anders Hedberg, Dunn would experience the most team success of his professional career, helping the Jets to the Avco Cup finals in back-to-back seasons, winning the WHA championship in 1978.

Dunn retired following the Jets' championship win in 1978 and returned to the Vancouver Canucks, accepting an assistant coaching position with Vancouver alongside new coach Harry Neale, a position he held until 1981.