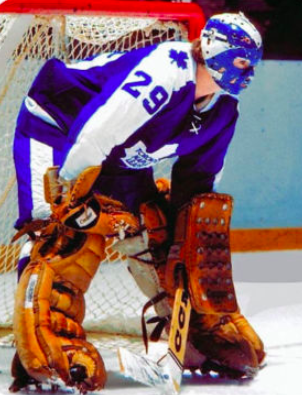 Palmateer played all his minor and junior Hockey in the Toronto area, and as a 12 year old, played in the famous Quebec International Pee-Wee Hockey Tournament with the Toronto Shopsy's in 1966.

Palmateer then played his first junior Hockey with the Markham Waxers in the Ontario Jr. B league in 1971, and jumped to the OHA junior A league the next season with the Toronto Marlboros, playing there until 1974. He was named to the OHA All-Star First Team in 1972-73 and in the same year was the winner of the Dave Pinkney Trophy for top team goaltending, as he helped the Marlboros win the 1973 J. Ross Robertson Cup and Memorial Cup championships.

Palmateer was then drafted in the fifth round 85th overall by the Toronto Maple Leafs in the 1974 NHL Amateur Draft, and started his pro career with the Saginaw Gears of the International Hockey League / IHL for the 1974-75 season. He then moved the the Oklahoma City Blazers of the Central Hockey League, playing there for 2 seasons.

Palmateer began his career with his hometown Toronto Maple Leafs during the 1976-77 season and would serve as the club's starting goaltender for the next three seasons, becoming a fan favourite with his dynamic exploits in the crease, as he was an acrobatic goalie, always flopping around on the ice like a fish out of water. He got his first victory on October 28, 1976 vs the Detroit Red Wings and his first shutout on November 17, 1976 vs the Montreal Canadiens, and posted a 26-21-8 record, including playoffs with the Maple Leafs.

In his second season in Toronto, posting 34 wins with 5 shutouts. He was a key figure in the Maple Leafs drive to the semi-finals in the Stanley Cup Playoffs. In 1979 the Toronto Maple Leafs named Palmateer the recipient of the seldom awarded J.P Bickell Memorial trophy for outstanding performance and standard of excellence.

In his fourth season, the 1979-80 campaign, Palmateer was slowed by injuries and made just 38 appearances for the Maple Leafs while sharing the duties with four other goalies. Off-ice drama during this season would lead to his departure from Toronto. After being sidelined with an ankle injury that kept him out of the crease for six weeks, Palmateer's injury was questioned by the team's management, who felt he was healthy enough to play. Palmateer, a pending free agent, could not get Maple Leafs general manager Punch Imlach to agree to a multi-year contract and their impasse ultimately led to the goaltender being traded to the Washington Capitals.

In his first season in Washington, Palmateer was slowed by a series of nagging injuries that included a pulled hamstring, ankle ligament damage, and bone chips in his wrist. Year two got even worse as his action-worn knees began to give way. Palmateer's knee problems, which seriously hampered his mobility, ultimately cost Washington GM Max McNab and head coach Gary Green their jobs.

Capitals owner Abe Pollin, who had committed a large sum of money towards securing Palmateer's services, was not happy to see the goalie struggling and demanded Green continue to use him despite diminishing returns. When Green protested and said that his knees were "gone" and he could no longer play him, Pollin instructed Green to "fix him" so that, at the very least, the Capitals could trade him for something in return. When Palmateer continued to falter, both McNab and Green were fired. During the off-season, David Poile was hired as the new general manager of the Capitals and just days into the job, on September 9, 1982, made his first trade by sending Palmateer back to the Maple Leafs for cash considerations.

Back in Toronto, Palmateer resumed his job as the club's starting goalie, suiting up for 53 games. The next year, his knee problems flared up again and the goalie was limited to 34 games and had his 12th knee surgery performed. With Palmateer sidelined, the bulk of the goaltending duties for the Maple Leafs fell to prospect Allan Bester, who was summoned from the Ontario Hockey League in midseason to take over the starting job. The following year, with Palmateer ready to return, the Maple Leaf management opted to go with youth in goal, and named 20-year olds Bester and Ken Wregget their tandem. That left Palmateer as the odd man out and he was instructed by Maple Leafs general manager Gerry McNamara to stay home and collect his salary. Out of Toronto's plans, Palmateer nearly got a chance to return to the ice in February, after an injury to Edmonton Oilers star goaltender Grant Fuhr. The Oilers' director of player personnel, Barry Fraser, thought Palmateer could be a veteran option to fill in for Fuhr and contacted the Maple Leafs about a trade, but the talks never got off the ground when Fuhr's injury proved to be less serious than first thought. The season would end with Palmateer never suiting up at all.

Palmateer's final taste of NHL action - a preseason game - would come with the Edmonton Oilers. However, with 14 knee operations, a year spent off the ice and the all-star tandem of Fuhr and Andy Moog already in Edmonton, his tryout was brief and he officially retired from the National Hockey League. Palmateer would return to the Maple Leafs as a scout in 2001 and worked with the club for the next 14 years. He is now up to twenty knee surgeries and a knee replacement.

Mike Palmateer was inducted into the Aurora Sports Hall of Fame in 2017.