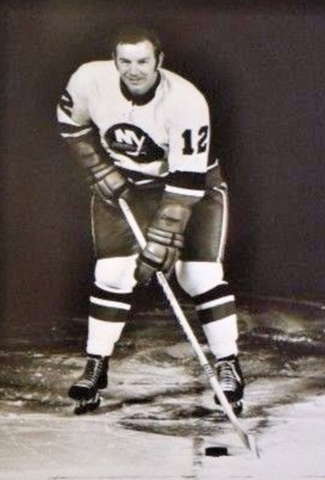 Crisp first played junior Hockey in 1960 with the OHA St. Mary's Lincolns Junior B squad and scored 49 goals, 71 assists during the season, and edged out Phil Esposito for the league scoring title.

Crisp signed with the Boston Bruins in 1961 and reported to the Niagara Falls Flyers of the OHA. During his second season with the Flyers, Crisp recorded 35 goals and 39 assists in 50 games, and led the Flyers to the 1963 George Richardson Memorial Trophy championship. The Flyers would get to the Memorial Cup championship finals, losing to the Edmonton Oil Kings 4 games to 2. Crisp scored 11 goals and 12 assists in 16 playoff games.

Crisp then played for Boston's minor league team, the Minneapolis Bruins for 2 seasons, scoring 43 goals, and got his first taste of NHL life in 1966 during a three-game try-out with the Boston Bruins.

Crisp then played 2 seasons with the Oklahoma City Blazers, and was then chosen by the St. Louis Blues in the 1967 NHL Expansion Draft. With the Blues, he went to the Stanley Cup Finals three straight seasons, with the Blues, and played for them for 5 seasons. Crisp also played 51 games for the AHL Buffalo Bisons in 1969-70 season while also playing for the Blues.

In 1972, he was again chosen in the NHL Expansion Draft, this time by the New York Islanders. Late in the 1972–73 season, he was traded to the Philadelphia Flyers for Jean Potvin, Crisp played 54 games in Long Island.

During his NHL playing career, Crisp scored 67 goals and 134 assists in 536 games.

Crisp then became a assistant coach of the Philadelphia Flyers, a position he held for 2 seasons before becoming the head coach of the OHL Sault Ste. Marie Greyhounds in 1979. His first season coaching the Greyhounds was not exactly successful, but he soon turned the team around, and over the next 5 seasons had a winning record each year, and in his final year in Sault Ste. Marie, led the 1985 Sault Ste Marie Greyhounds to an undefeated season at home, going 33-0, setting a Canadian junior Hockey record. The club finished first in the Ontario Hockey League with 54 wins, eleven losses, and one tie. The Greyhounds also took the OHL playoff championship, losing just two games in total, ironically, both at home. The Greyhounds represented the OHL at the Memorial Cup, where they came up short, losing to eventual champion Prince Albert of the WHL in the semi-final. Crisp was named Coach of the Year in the OHA in 1983-84 while with the Greyhounds.

In his second NHL season as a head coach, Crisp guided the Flames to the 1989 Stanley Cup championship. After three seasons in Calgary, and after the Flames followed up their Stanley Cup victory with a first-round exit in 1990, Crisp was fired.

Crisp was hired as head coach of the Tampa Bay Lightning. He was head coach from the franchise's inception through October of 1997, coaching 391 games - the most ever by an expansion coach.

Crisp also served as the assistant coach of the silver medal-
winning Canadian team at the 1992 Winter Olympic Games in Albertville, France.