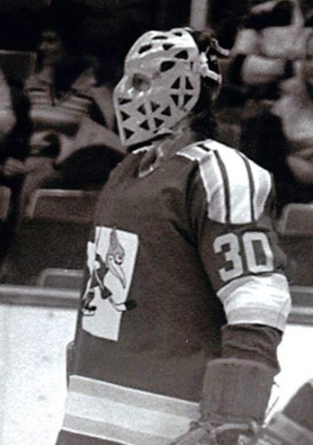 Norris played his junior Hockey for the Estevan Bruins in the Saskatchewan Junior Hockey League / SJHL, He backstopped the Bruins to first place in the 1961-62 SJHL regular season leading the league in shutouts with 7, and then again in the 1962-63 season (5 shutouts). The Bruins went on to win the 1963 SJHL playoff championship.

Norris started the 1964-65 season with the Blades, but would be called up to the NHL to play for the Boston Bruins, as Bruins starting goalie Eddie Johnson got injured. Norris made his NHL debut on January 31, 1965 vs the Toronto Maple Leafs. Eddie Shack scored the 1st NHL goal against Norris, as the Maple Leafs won 4-2.

Norris split the 1965-66 season between the Blades and the Oklahoma City Blazers of the Central Professional Hockey League / CPHL.

Norris played the 1966-67 season for the Blades, and was then part of a NHL blockbuster trade in May 1967, as the Bruins included him, along with Gilles Marotte and Pit Martin in a trade with the Chicago Black Hawks for Phil Esposito, Fred Stanfield and Ken Hodge.

The Montreal Canadiens then acquired Norris their new American Hockey League / AHL team, the Montreal Voyageurs who would also play at The Forum in Montreal. Norris played just 1 season for the Voyageurs (55 games plus 8 playoff games), and was named to the 1970 AHL Second All-Star Team.

Norris was then traded to the Los Angeles Kings in May 1970, for a backup to Kings goalie Denis DeJordy. Norris would play 25 games for the Kings, his last in the NHL, winning just 7.

The Seattle Totems of the WHL claimed Norris in a reverse draft in June 1971. He played 38 games for Seattle, and finished the 1971-72 season with the Springfield Kings of the AHL.

Norris then joined the World Hockey Association / WHA, playing for the Alberta Oilers in 1972-73, Edmonton Oilers 1973-74 and finishing his career with the Phoenix Roadrunners from 1974 to 1976.