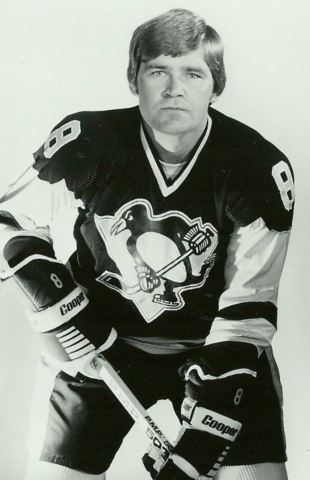 Stewart played Hockey with the Rogers Rangers in Charlottetown before leaving as a 16-year-old to join the Oshawa Generals in the Ontario Hockey Association / OHA. He was named Captain in 1969-70 and was a starter on defense for the OHA All-Stars in 1969-70.

The Boston Bruins selected Stewart in the first round (13th overall) of the 1970 draft.

Stewart was sent to the Bruins minor league affiliate, the Oklahoma City Blazers in the Central Hockey League / CHL, playing the 1970-71 season there.

The next season, he played 10 games for the Blazers, 8 games in the NHL for the Bruins, making his NHL debut on October 10, 1971 vs the New York Rangers and 39 games in the American Hockey League / AHL for the Boston Braves, when the Bruins traded him to the NHL California Golden Seals with Reggie Leach and Rick Smith for Don O’Donoghue and Carol Vadnais on February 23, 1972. He played with the Seals until 1976, serving as captain from 1974 to 1976. He is the Seals all-time leader in games played (414) and penalty minutes (691).

Steward then played 2 seasons with the NHL Cleveland Barons (1976-78), and became more involved with the NHL Players Association acting as a team rep and was involved in the Collective Bargaining Agreement talks between the NHL and the players. In 1976-77 the owner of the Cleveland Barons had a crisis on his hands in meeting payroll obligations. At one point it looked like the players would all be released with no compensation in the way of pay. Bob Stewart helped settle the dispute. He made several national media appearances and was even interview on Hockey Night in Canada. A settlement was reached but the Barons had only one more season in Cleveland before most of the players were dispersed to Minnesota.

He then played 1 season plus with the St. Louis Blues (1978-79), when the Pittsburgh Penguins traded for him early in the 1979-80 season. His only season in the playoffs was with the Penguins in 1980. Ironically his final game was on April 14 that spring against the Boston Bruins in the Garden where he made his debut some eleven years before.

Playing most of his career for cellar dwelling teams, his career plus-minus rating of minus 260 is the lowest total in NHL history among players for whom the stat has been recorded (576 NHL games).

Bob Stewart was inducted into the Prince Edward Island Sports Hall of Fame in 2002.

I wish I could've met the man. I've been dating his granddaughter for the last year and I dont plan on leaving her soon. She has lost her mom, dad, grandpa, and sadly soon might lose her step grandmom. The only person left that she is really close to. I've been looking online trying to learn about Bob but no lead. Bob's wife, Cindy, doesnt say or do much so I cant learn from her. If anyone out there sees this and knew Bob please reach out. I know this is strange but please let me know.