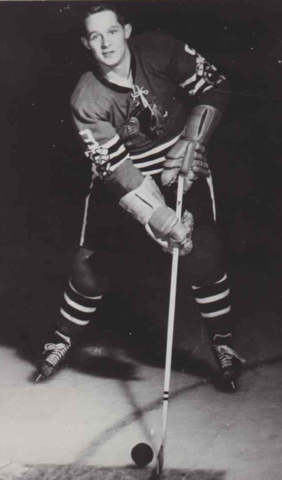 Reibel played only one season of junior Hockey with the Windsor Spitfires of the OHA in 1949-50. It was all he needed to make his mark in the minds of the NHL's managing ranks. During that one season, Reibel became the first player in the Ontario league's history to surpass the 100-point mark in a single season, winning the scoring title with 53 goals and 129 points in 48 games

On the strength of such a scoring flourish, he turned pro in the Detroit Red Wings chain, putting in a stint with Omaha Knights of the USHL. He then stepped up the ladder with the Indianapolis Capitals of the AHL where he won the Dudley "Red" Garrett Memorial Award as rookie-of-the-year in 1952, with 67 points in 68 games.

But his debut with the Red Wings was delayed when a train hit a car he was riding in. He became cross-eyed because of the accident, so the Red Wings sent him to the Edmonton Flyers of the Western Hockey League to see whether he could still play. He had a league-leading 90-point regular season, and a 12 point playoff run with his vision back to normal, the gifted centre found himself playing alongside Gordie Howe and Ted Lindsey in Detroit the next season.

As a talented playmaker, Reibel scored at a very steady clip, helping his club to two Stanley Cup championships in 1954 & 1955 during his four and a half seasons with the team. In 1956, his Red Wing success was topped off with a Lady Byng Trophy for gentlemanly play. Reibel also topped Howe in points (66 to 62) in 1954-55, when Howe played six fewer games. That was the only season Howe didn't lead the Wings in scoring during his prime.

Reibel scored twice in the ninth NHL All-Star Game for Detroit against the All-Stars on October 2, 1955. Following the winning goal in the second period he scored a last minute empty net goal to complete a 3–1 victory.

Reibel was traded to the Chicago Black Hawks on December 17, 1957 in an eight-player swap that was the largest deal in league history at that time, and marked a dramatic decline in his Hockey career. He had thrived on sense of fidelity and consistency of skating for the Wings. Once the ties were cut, he no longer played with his usual zeal. He lasted only 40 games with the Black Hawks and was then sold to the Boston Bruins where he played one full season in 1958-59.

Reibel closed out his Hockey career, playing 2 seasons for the AHL Providence Reds from 1959 to 1961.

In NHL regular season play, Reibel scored 84 goals and 161 assist for 245 points in 409 games. He recorded 6 goals and 14 assists for 20 points in 39 career playoff appearances.

Reibel holds the record for most assists by a player in his first NHL game with 4 assists.