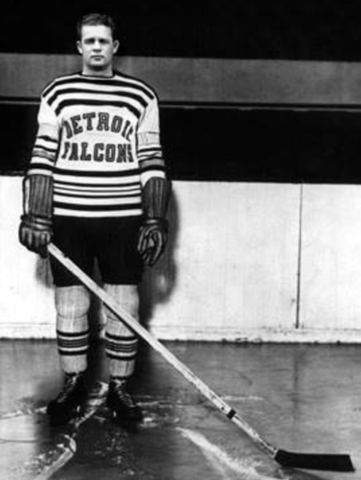 Goldsworthy played senior Hockey with the Edmonton Victorias, and was then signed by the Western Hockey League Edmonton Eskimos in 1925.

Goldsworthy then joined the Springfield Indians of the Canadian-American Hockey League / Can-Am for 3 seasons from 1926 to 1929, and got to play his first NHL game in the 1929 playoffs for the New York Rangers, and joined the Rangers full time the next season.

The Rangers then traded Goldsworthy to the London Tecumsehs on October 29, 1930 where he played one season in the International Hockey League / IHL.

The Tecumsehs then traded Goldsworthy to the Detroit Falcons in January, 1931, and Goldsworthy would stay with the Detroit franchise until 1933, playing for the Falcons, Olympics and Red Wings. Goldsworthy was the first U.S.-born player to suit up for Detroit’s National Hockey League franchise

Detroit then traded Goldsworthy to the Chicago Black Hawks in October, 1933, and he was an important checker when the team won the 1934 Stanley Cup championship. Goldsworthy also played for the London Tecumsehs during the regular season - 1933-34.

The next year he was traded in October, 1934 to the Montreal Canadiens as part of a blockbuster deal that also featured Howie Morenz and Lionel Conacher. That year Goldsworthy hit the 20-goal mark the only time in his career while playing with George Mantha and Armand Mondou, and scored 15 goals the following season with Montreal.

Goldsworthy then played out his professional career with the Cleveland Barons 1939-40, Buffalo Bisons 1940-41 and the Dallas Texans 1941-42.