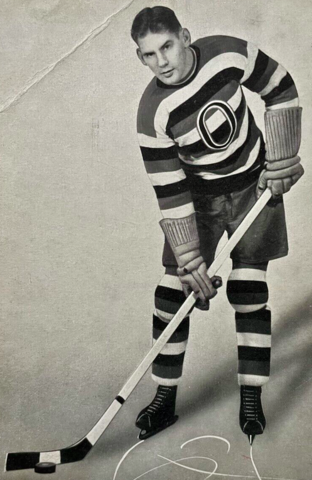 Shield joined the Ottawa Montagnards for the 1927-28 season, while also playing with the New Haven Eagles and making his NHL debut with the Ottawa Senators on March 3, 1928 vs the Chicago Black Hawks at Ottawa Auditorium in a 3-1 Ottawa win, also getting in 2 NHL playoff games.

Shields scored his 1st NHL goal vs George Hainsworth of the Montreal Canadiens on November 13, 1929 at 13:30 of the 2nd period at Ottawa Auditorium in a 3-3 OT tie. He played another 46 games for the Senators during the 1929-30 season and then was traded to the Philadelphia Quakers by Ottawa with Syd Howe and Wally Kilrea for $35,000, November 6, 1930 to help liven up the team and attract more Quaker fans. Philly was in bad financial shape at the time and needed greater attendance to survive. With the assistance of Shields and company their games became "quite exciting", culminating with a Christmas Day game when the entire Philadelphia police force were called to quell a near riot. With the onset of the Depression, the team folded the following year. The Quakers set another near NHL record for games lost, however they were one of the more "lively" teams of the time.