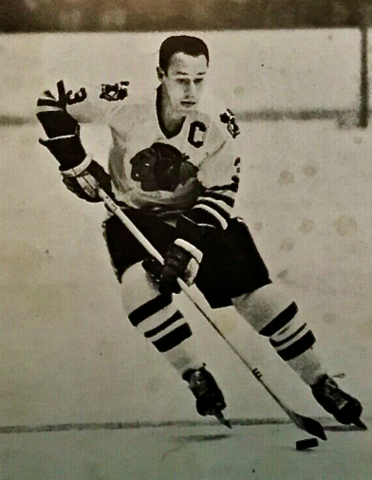 Pilote had a successful second year with the Teepees, and even got called up to the Buffalo Bisons for a couple of games in late December. The Teepees went all the way to the OHA final (J. Ross Robertson Cup) that year.

Pilote would sign with the AHL Buffalo Bisons the next season, and spend the next 4 seasons there, including a 20 game stint with the Chicago Black Hawks in his final year with the Bisons, making his NHL debut on January 25, 1956 vs Toronto Maple Leafs at Maple Leaf Gardens in a 3-1 Toronto win.

Pilote scored his 1st NHL goal vs Gilles Mayer of the Toronto Maple Leafs on February 4, 1956 at 5:00 of the 1st period at Maple Leaf Gardens in a 4-2 Chicago win.

Pilote was on the first or second all-star team every year from 1960 to 1967, and played in eight consecutive All-Star games during that time. During his playing career, he was respected as an iron man playing 376 consecutive games. Wearing his familiar number 3, Pilote played his best Hockey teamed with Elmer 'Moose' Vasko on the Chicago blue line. Together they formed one of the great all-time defence pairings.

On July 18, 2008, the Black Hawks announced that the #3 jersey worn by Pilote and Keith Magnuson would be retired in a joint ceremony. The ceremony was held on November 12, 2008, before the Black Hawks faced off against the Boston Bruins in an Original Six matchup at the United Center.