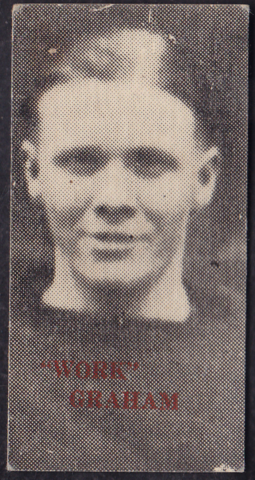 Graham played for his hometown Owen Sound Greys when they won their first Memorial Cup as Canadian junior Hockey champions in 1924, scoring 7 goals and 4 assists in 15 games.

After two years of senior Hockey with the Stratford Indians and the London Ravens, Graham turned pro with the Chicago Cardinals in 1926. There was a problem with his first pro season, as the AHA found that Teddy Graham had broken a valid contract and was fined the amount of the difference between his Cardinals' contract and his contract with London Ravens of the Ontario Senior League.

Graham would make his NHL debut with the Chicago Black Hawks in the 1927-28 season, scoring 1 goal in 20 games played.

Graham then played the 1928-29 season for the AHA Tulsa Oilers, having a outstanding season, scoring 10 goals and 15 assists in 35 games, leading the AHA in assists.

Graham would find himself back in the NHL again the next season, playing for the Black Hawks and also the Tulsa Oilers too.

Graham then would start the 1936-37 season with the Providence Reds, playing 9 games with them, before being traded to the New York Americans by Boston for Walter Kalbfleish, December 19, 1936, and finishing his NHL career in New York, playing in 31 games.

Graham would finish his pro career with the New Haven Eagles in 1937-38 season.