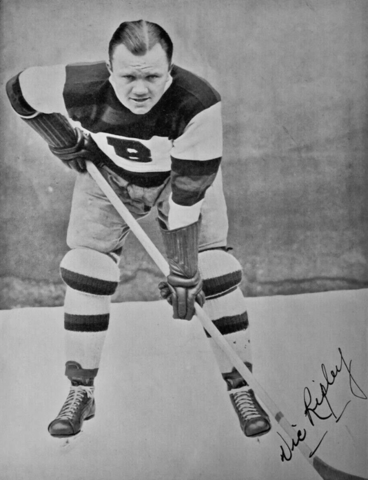 Ripley was then claimed by the NHL Chicago Black Hawks from Kitchener in a Inter-League Draft, May 14, 1928, and he would play with the Black Hawks for the next 4 plus seasons. He made his NHL debut on November 15, 1928 vs Toronto Maple Leafs at Arena Gardens. He scored his 1st NHL goal vs Clint Benedict of the Montreal Maroons on November 17, 1928 at 18:13 of the 1st period at the Montreal Forum.

Ripley helped the Black Hawks reach the Stanley Cup final in 1931. Ripley also scored the 1st Ever Goal at Chicago Stadium on Joe Miller of the Pittsburgh Pirates on December 15, 1929.

Ripley then signed with the International Hockey League / IHL Cleveland Falcons for the 1935-36 season, having a outstanding season, scoring 14 goals, 32 assists. The IHL became the International-American Hockey League / IAHL for the 1936-37, and the Falcons became the Cleveland Barons, with Ripley starting the season in a slump with 2 assists in 13 games. He was then signed as a free agent by the IAHL New Haven Eagles after his release by Cleveland, January 19, 1937, playing the final 13 games of the season in New Haven.