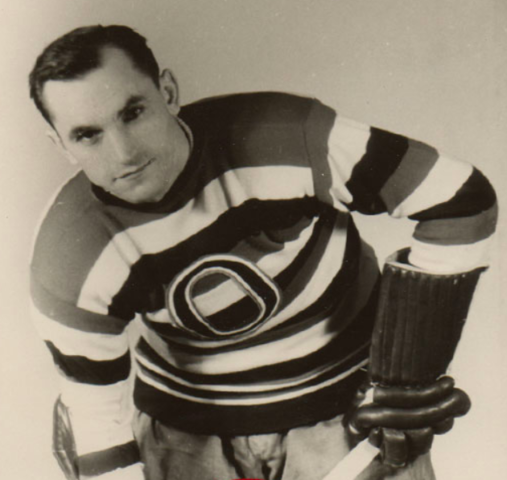 Wasnie then turned pro with the Winnipeg Maroons of the Central Hockey League / CHL for the 1925-26 season. The Maroons joined the American Hockey Association / AHA for the 1926-27 season, and during the season, the Chicago Black Hawks became away of Wasnie, and bought him, along with Charlie Gardiner and Cecil Brown for $17,500, April, 1927.

Wasnie would become the first player of Ukrainian descent to play in the National Hockey League.

Wasnie played 14 games for the Black Hawks during the 1927-28 season, scoring just 1 goal. The Black Hawks finished last in the NHL that season with just 7 wins all season. Before the season ended, Wasnie was traded to the Saskatoon Sheiks of the Prairie Hockey League with Corb Denneny for Eddie McCalmon and Earl Miller, January 11, 1928. Wasnie never played in Saskatoon, but did finish the season with the Quebec Castors of the Canadian-American Hockey League / Can-Am. Wasnie was then transferred to the Newark Bulldogs (Can-Am) after the Quebec franchise relocated, October, 1928.

In October, 1932, Wasnie was loaned to the New York Americans by Montreal for the 1932-33 season, having another solid NHL season, scoring 11 goals, 12 assists for New York.

Wasnie was traded again, this time to the Ottawa Senators by Montreal for cash to complete the transaction that sent Harold Starr and Leo Bourgeault to the Montreal Canadiens (February 14, 1933), March 23, 1933. He was then transferred to the St. Louis Eagles after the Ottawa franchise relocated, 1934.

Wasnie was then traded to the Minneapolis Millers of the CHL by St. Louis with $1,600 for Fido Purpur, December 28, 1934, playing 1 season in Minneapolis, as he was transferred to the Rochester Cardinals of the International Hockey League / IHL after Minneapolis franchise relocated, October 16, 1935. Wasnie was voted to the CHL First All-Star Team while playing for the Millers. Wasnie only played 7 games for Rochester before they traded him to the Pittsburgh Shamrocks (IHL) for Roger Cormier, December 12, 1935 where he finished the season.

Wasnie finished his pro Hockey career with the Kansas City Greyhounds of the AHA, playing there for 4 seasons from 1936 to 1940.

Hockey Slap Shot History - "Wasnie would put all his Hockey sticks in a pork barrel over the summer so they would warp and curve by winter." Hence, Wasnie had Hockey’s only curved sticks of the time, and became the game’s first proponent of the slap shot. Wasnie described his shot to the Brainerd Daily Dispatch in 1971. “There were no slap shots being taken in those days. I had a crooked stick and was able to put a curve to my shots. I was the only one who had one, and after I broke it, I got another with a bow in it.” Wasnie’s shot was famous in that era, and it is also one of the reasons that Nick Wasnie will be remembered in Hockey history.

Wasnie was credited by Aurel Joliat as "the first player to use the slap shot".

"Nick Wasnie had one of the hardest shots the pros have ever seen," said John Mariucci, the former NHL star and Minnesota University coach.

Nick Wasnie is a "Honoured Member" of the Manitoba Hockey Hall of Fame, inducted in 1986.