Carl Voss First Winner of the Calder Memorial Trophy in 1933 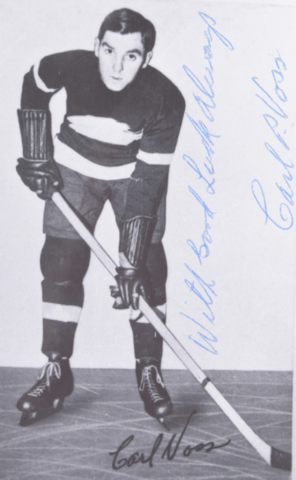 Voss would grow up in Southern Ontario, and play his junior Hockey while attending Queen's University in Kingston, Ontario, helping the Golden Gaels to the 1926 Memorial Cup finals, with Voss scoring in both games, but in a losing cause. Voss also played on the Queen's football team, which won the 1924 Grey Cup as Canadian football champions.

Voss played his final year of junior Hockey with the Toronto Marlboros, but turned professional by becoming the first player signed by Conn Smythe, the owner of the newly-christened NHL Toronto Maple Leafs. This also made Voss the 1st American to play for the Maple Leafs.

Although he played only 14 games with the Maple Leafs, Voss was a leading performer on the club's affiliated minor pro squads during the next five years. He suited up for the Toronto Falcons and London Panthers of the Canadian Professional Hockey League / CanPro League and the Buffalo Bisons of the International Hockey League / IHL.

Voss led the Bisons to the F. G. "Teddy" Oke Trophy championship as IHL Champions in 1931-32. Voss also led the IHL in scoring during the 1931-32 season and was named to the First All-Star Team.

Voss signed with the New York Rangers to start the 1932-33 season, but was sold to the Detroit Red Wings after playing just 10 games for the Rangers, scoring 2 goals, 1 assist. In Detroit, Voss scored 6 goals, 14 assists during the last 38 games of the season, and was awarded the very first Calder Trophy (Calder Memorial Trophy) as NHL rookie of the year.

In 1933-34, Voss played in eight games with the Red Wings before being traded to the Ottawa Senators for cash and player Cooney Weiland. From then on, he was traded back and forth in the NHL. He saw action with the St. Louis Eagles, New York Americans, and the Montreal Maroons before settling in with the Chicago Black Hawks in 1937-38. He helped the Black Hawks reach the 1938 Stanley Cup finals, and scored the Stanley Cup winning goal in game four vs his old team, the Toronto Maple Leafs. A serious knee injury in that year lingered and was too much to overcome when Voss tried to play at training camp in the fall of 1938, and he retired as a player, which makes the last goal he ever scored - A Stanley Cup Winner !

After retirement, Voss joined the U.S branch of the Canadian Cycle and Motor Company / CCM. For the next ten years, Voss was their main principal agent associated with Hockey teams across the United States. He also served as a referee during his stay with the CCM as he refereed games in the American Hockey League, California Hockey League and various college games.

Eventually Voss moved into the administration of the game by supervising officials in the minor leagues and replacing Jim Hendy as president of the United States Hockey League / USHL. After the USHL suspended operations, Voss joined the St. Louis Flyers of the AHL as manager and coach and continued to work as a consultant to the on-ice officials.

The NHL was well aware of Voss' quality administrative work and jumped at the chance to offer him the Referee-in-Chief job in 1950. During his 15 years in this capacity he implemented a wide range of progressive changes to the league's officiating structure. He actively scouted the minor and amateur ranks for potential NHL officials and provided superior training for them. The league's on-ice staff grew from 10 to 23 by the mid-1960s. They received top-notch training and a directive from Voss to call the game with as much uniformity as possible. A tremendous ambassador of the game, Voss also made his officiating clinics available to amateur or grass roots officials.

Carl Voss was inducted into the Hockey Hall of Fame in 1974 as a builder.