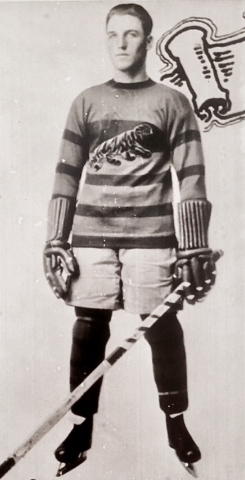 Frew was born in Scotland, but raised in Calgary, Alberta where he played his minor and junior Hockey. Frew played on the Calgary Canadians which won the 1924 Abbott Cup and went to the 1924 Memorial Cup final, Frew scored a Memorial Cup goal in game 2 on March 28 , but that wasn't enough as the championship went to the Owen Sound Greys.

Frew and the Canadians won the 1926 Abbott Cup, and also the 1926 Memorial Cup championship, which had the first sudden-death game for the Memorial Cup final on March 26.

Frew would turn pro the next season, playing for the Calgary Tigers, which would win both the 1927 Calgary Albertan Trophy as champions of the Prairie Hockey League and the 1927 Merchants Casualty Cup as the Professional Champions of Western Canada.

Frew then joined the Canadian Professional Hockey League / Can-Pro to start the 1927-28 season, and would play for 3 teams (Stratford Nationals 1927-28, Buffalo Bisons & Toronto Millionaires 1928-29) over the next 2 seasons. Frew and the Stratford Nationals were Can-Pro league champions in 1928.

Partway through the 1932-33 season, Frew joined the Quebec Castors of the Can-Am League. It was here that he caught the attention of the NHL Montreal Maroons who brought him up for 30 games during the 1933-34 season. Frew was then traded to the Ottawa Senators by Montreal with future considerations (Vern Ayres and Normie Smith, October 18, 1934) for Al Shields, September 20, 1934, and then transferred to the St. Louis Eagles after Ottawa franchise relocated, September 22, 1934, playing 48 NHL games in St. Louis.

On October 15, 1935, the Montreal Canadiens in the Dispersal Draft claimed the veteran in the aftermath of St. Louis franchise folding. He played 18 games for the Canadiens that year and spent the rest of his time with the Springfield Indians of the Can-Am League. He remained with the Indians when they joined the newly organized International-American Hockey League / IAHL in 1936-37, playing there until early 1938, when he jumped leagues, and joined the Vancouver Lions of the Pacific Coast Hockey League / PCHL. Frew played 1 more season in the PCHL for the Spokane Clippers, before rejoining the IAHL Springfield Indians for the 1939-40 season.