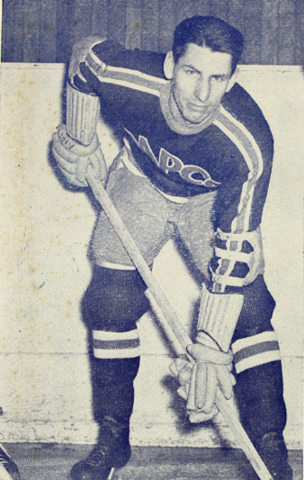 Kilpatrick’s family emigrated from Liverpool, Great Britain to Saskatchewan, Canada shortly before his 4th birthday. In 1935 he was playing for the Prince Albert St Marks team when he was recruited to play for the Wembley Lions in the British League at a time when newly imposed restrictions on foreign players meant that British-born talent was at a premium. Kilpatrick played two seasons in the English National League with the Wembley Lions where he was a checking forward. In those days of predominantly two-line Hockey, his ice time was limited being the seventh forward and he registered modest statistics during those two seasons of 5 goals and 3 assists for 8 points with 4 penalty minutes, but impressed enough to earn a place at the 1936 Winter Games.

Kilpatrick was just 18 years of age when he became the youngest Briton ever to win a gold medal at the Winter Olympics. Playing in his customary left wing position, Kilpatrick played in the opening game of the GB campaign in 1936, a 1-0 win over Sweden in Garmisch, Germany – it was his only appearance, however, this was enough to earn him a gold medal when GB went on to win the tournament.

On his return to Canada, Kilpatrick began a long association with the Nelson Maple Leafs in the West Kootenay Hockey League, and was a mainstay of their team until 1952.

Kilpatrick, also played for, and was the captain of the Victoria Bapcos during the 1941-42 season, and would lead the Pacific Coast Senior Hockey Association in scoring in 1941/42 with 43 points in 27 games.

The Victoria Bapcos were sponsored by a Pendrey Paint Company.