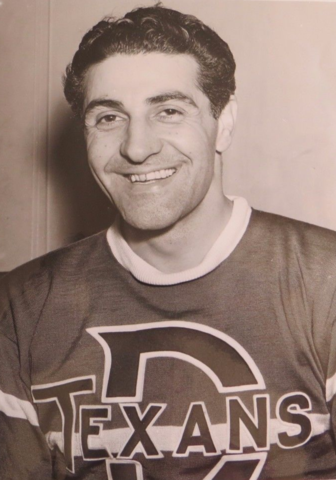 Palangio was an offensive standout with the North Bay Trappers of the NOHA. After he led all players in the playoffs with 12 points in four games, he went straight to Montreal to join the Canadiens for the tail end of their season and a run in the playoffs.

The following season, it became apparent that the star of North Bay would only make it as a journeyman in the NHL. He picked up 14 games and his first three big-league goals with the Detroit Cougars. He then went to the minors where, save two games with the Canadiens in 1928, he remained for the nine seasons that followed.

During that time, he put in stints with the Kitchener Flying Dutchmen, London Panthers, Syracuse Stars, and, his longest outing, the St. Louis Flyers of the AHA, helping them win the 1935, 1936 and 1938 Harry F. Sinclair Trophy as American Hockey Association champions.

In 1936-37, however, Palangio became NHL bound once again. He joined the Chicago Black Hawks who were fast assembling a Stanley Cup contender. The sturdy left winger fit in well, netting a career-best 17 points in 30 games. The following season, he saw lighter duty with the Black Hawks, and played in 3 playoff games for the Black Hawks, as they won the 1938 Stanley Cup championship.

Palangio returned to a minor-league career with such teams as the Tulsa Oilers and the Dallas Texans.

North Bay was home for Palangio, and once his lengthy pro career was over he returned to star in the Ontario senior league circuits with the Sudbury Open Pit Miners, North Bay Merchants, North Bay Rangers and the North Bay Black Hawks.

His devotion of Hockey saw the city renamed their arena after him in 1991. They also honour their local sportsperson of the year award in his name.

In 1996 Palangio was invited to the closing ceremonies at the Montreal Forum by his former team, the Montreal Canadiens, and was joined by the likes of Guy Lafleur and Maurice Richard on the ice. He was the oldest living former Montreal player at the time.