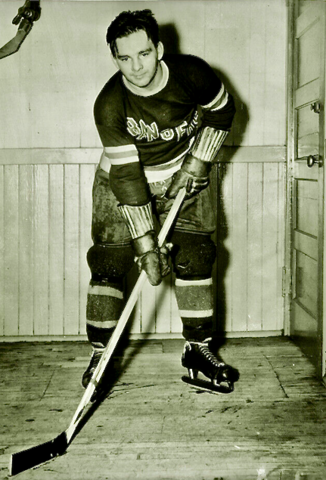 Juzda played his junior Hockey for the local Elmwood Maple Leafs of the Western Junior Hockey League / WJrHL in 1938-39 and then joined the Kenora Thistles helping the Thistles reach the Memorial Cup final in 1940.

Juzda was called up by the New York Rangers for 5 games in 1940, making his NHL debut on December 5th vs the Montreal Canadiens, but spent most of the 1940-41 season with the Philadelphia Ramblers of the American Hockey League / AHL.

Juzda played the 1941-42 season with the Rangers, scoring his 1st NHL goal on November 29 vs Johnny Mowers of the Detroit Red Wings, which turned out to be the game winner too.

Juzda then put his NHL career on hold when he volunteered for World War II service with the Royal Canadian Air Force (R.C.A.F.). He maintained his connection with Hockey by playing for the R.C.A.F. Hockey team in the Winnipeg National Defense Hockey League / WNDHL for 3 seasons (1942-44, and 1 season with the Dartmouth RCAF in the Nova Scotia Defense Hockey League / NSDHL in 1944-45.

After the war, Juzda returned to Hockey full-time. He rejoined the New York Rangers in time for the 1945-46 season, but finished the season with the Providence Reds of the American Hockey League / AHL.

Over the next 2 seasons, he would appear in another 111 games with the Rangers, and 18 games with the AHL New Haven Ramblers before being traded to the Toronto Maple Leafs with Cal Gardner, Rene Trudell and the rights to Frank Mathers for Wally Stanowski and Moe Morris, April 26, 1948.

Juzda was an old school defenseman if there ever was one. He cared not about offense. He only scored 14 goals and 68 points in 398 NHL games. But he took immense pride in his defensive play. The bruising bodychecker played the game rough and tough, and was known for his bone-rattling bodychecks.

While playing with the Maple Leafs, a well-aimed Juzda hip check sent Maurice "Rocket" Richard into the boards. The Rocket flipped up in the air, his skates shattering the glass at Maple Leafs Gardens - Plexiglas was still new back then, and no one thought it could be broken.

It was with the Maple Leafs where Juzda earned the nickname "The Beast" Apparently after the Maple Leafs had won a game, Juzda shook one of his teammates' hands so hard he may have cracked a few bones, his son explained.

His injured teammate cried out "Juzda, you beast!" and it stuck.

Juzda would his 1st Stanley Cup in 1949 during his first season in Toronto and then the 1951 Stanley Cup championship, playing alongside legendary Maple Leaf team mates that included Ted "Teeder" Kennedy, Bill Barilko and Howie Meeker. He appeared in a total of 211 games with the Maple Leafs. He left the NHL after the 1951-52 season.

Juzda returned to his hometown Winnipeg to play for the Winnipeg Maroons for 9 seasons making two Allan Cup final appearances. He also played the 1953-54 season with the Brandon Regals.

Juzda also worked as an engineer with the Canadian Pacific Railroad for many years. He also coached amateur Hockey at all levels, from midget to senior. He continued to play oldtimers Hockey himself until he was in his 70s.

Bill Juzda was inducted into the Manitoba Hockey Hall of Fame in 1985.

William “Bill” Juzda was inducted into the Manitoba Sports Hall of Fame in 1992.