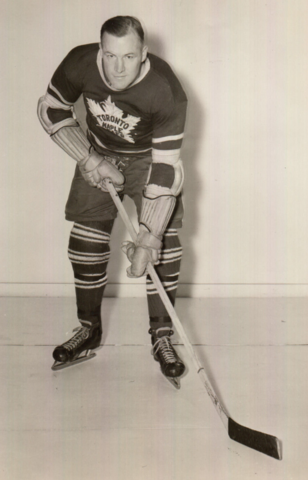 Davidson, who was born in Toronto, spent his entire career playing for Toronto teams, except one year when he played in Sryacuse, New York.

Davidson then played for the Toronto Marlboros in 1932, and moved up to their senior team in 1933.

Davidson turned pro with the Syracuse Stars in 1934, and also got called up for 5 games with the Toronto Maple Leafs. Davidson would again play for the Stars during the 1935-36 season, while also getting called up to the Maple Leafs for 35 games, more then twice the amount he played in Syracuse.

Davidson became a full time member of the hometown Toronto Maple Leafs in 1936. He would enjoy more than a decade's run with the Maple Leafs, highlighted by 2 Stanley Cup championships in 1942 and 1945.

Davidson served as Captain of the Toronto Maple Leafs from 1943–44 to 1944–45, and got to live every players dream, as he was presented with the Stanley Cup as captain in 1945.

Davidson was named Captain of the Toronto Maple Leafs, in the absence of Syl Apps, who was off fighting for Canada in the Second World War. Upon Apps' return to the team in 1945, Davidson promptly returned the captaincy to him, noting that Apps who was the true leader of the club.

During the diluted era of World War II when the NHL lost many of its players to military commitments, Davidson emerged as a moderate scoring threat. He reached double digits from 1942 through 1945. He topped out at 19 goals and 47 points in 1943-44.

Although he often played on the Maple Leafs' top line with Syl Apps and Gord Drillon - the DAD Line - offense wasn't a true measure of Davidson's value to the Maple Leafs. He was a physical yet usually clean checker known affectionately as "Rugged Robert." Davidson earned the reputation as one of the top defensive forwards in the game during his 12 year career. He accomplished this by perfecting the now-commonly used though illegal ploy of "clutching and grabbing." Davidson was an expert at it. He knew how to interfere with his check just enough to keep him from getting open for a shot without getting a penalty himself. Davidson, despite his reputation, spent very little time in the penalty box - in his career he spent 398 minutes in the penalty box in nearly 500 games.

After his playing days were over he stayed on with the Maple Leafs organization in a number of different capacities. His most notable was as Chief Scout. Bob Davidson is considered by many to be one of the best Hockey scouts of all time and was credited with building the Toronto Maple Leafs teams during the 1960s which dominated the NHL by winning the Stanley Cup four times (1961–62, 1962–63, 1963–64, 1966–67) within a six-year period. Davidson name was engraved on the cup 1962, 1967, but was a member of all 4 Stanley Cup wins by Toronto in the 1960s.

In the late 1970s Davidson's 40-plus year affiliation with the Maple Leafs came to cruel end. Harold Ballard axed his pay in half, and a heartbroken Davidson resigned in disgust. Ballard was unexplainably eliminating anything and anyone that was a part of the Maple Leafs glorious past.