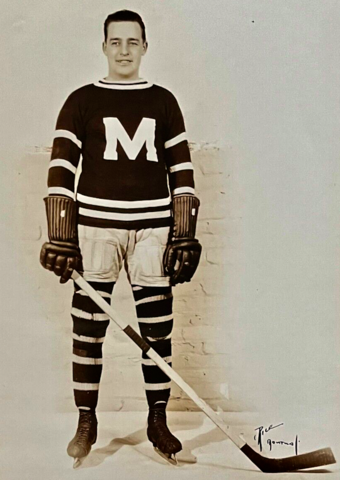 Stewart began play as an amateur at age 18 for the Cleveland Indians of the United States Amateur Hockey Association, leading the league in goals scored in four out of the five seasons he played before he and Babe Siebert were signed by the expansion Montreal Maroons of the NHL in 1925. Nicknamed "Old Poison," and with Siebert and veteran stars Clint Benedict, Punch Broadbent and Reg Noble, he would lead the Maroons to the Stanley Cup championship that season. Stewart himself led the league in goal- and point-scoring that year, and become one of the few rookies in history to win the Hart Memorial Trophy as the NHL's Most Valuable Player.

Stewart would later center the legendary "S Line", with Hooley Smith and Siebert, and star for the Maroons for seven seasons in all, winning a second Hart Trophy in 1930, having led the league once more with 39 goals in 44 games. As the Great Depression deepened, though, the Maroons had increasing financial problems — eventually folding in 1938 — and sold Stewart to the Boston Bruins for cash. His glittering play continued for the Bruins, finishing second in team scoring each of his three full seasons with the team, despite being moved back to defence a fair bit.
In 1935 he was traded to the New York Americans, for whom he played for most of his final five seasons in the league.

Stewart starred through his penultimate season (in which he was fourth on the Amerks in scoring) with 35 points in 46 games at age 36. The season following, in 1939, his foot speed (never regarded as fast) deserted him entirely.

Stewart retired thereafter as the NHL's career leading goal scorer, a mark he set in the 1937 season and held until Maurice Richard broke it in 1952

Played in the first NHL All-Star Game in 1934

Led the playoffs in scoring in 1926 with six goals, three assists and nine points in eight games