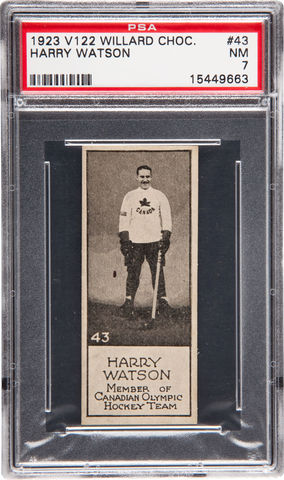 Harold Ellis "Moose" Watson - Allan Cup Champion 1922 & 1923 as a player, and 1932 as a coach - Winter Olympic Ice Hockey Champion 1924 - Harry Watson scored 36 goals in five games as the Canadian Team outscored the opposition 132-3 over six games - 11 Goals vs Czechoslovakia - 6 Goals vs Sweden - 13 Goals vs Switzerland - 3 Goals vs United States of America - Watson never played in the NHL - Retired as a player after the 1924 season - HHOF Induction in 1963 - IIHF Hall of Fame induction in 1998 - IIHF’s 53rd most influentially significant story in Hockey's history - In the First World War he served in the Royal Flying Corps as a fighter ace. He flew a Royal Aircraft Factory SE.5a to victory over an Albatros D.V on 25 January 1918 - By the time he scored his sixth and final win on 4 July, he had destroyed another enemy plane and sent four more down out of control.

Harry Watson was a member of the Toronto Granites team that won a gold medal for Canada in ice Hockey at the 1924 Winter Olympics.